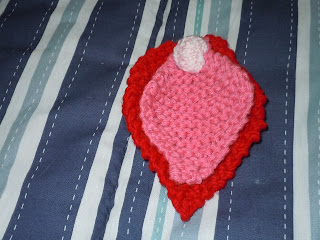 Women all across Canada have taken to their knitting and are sending vulva's to the nation's capital in protest against Conservative MP Steve Woodward's attempts to  reopen the abortion debate in Canada by going after, not abortion itself, but the legal definition of when a fetus becomes human. It is known as Motion 312 and will be debated in parliament this Thursday, April 26th.

"Here is your own personal, hand-knitted vulva. I send this in the hopes you will leave the vulva's of Canadian-women alone.  This vulva is also a reminder to you and  your party that women represent over 50% of voters and we have very long memories," said one knitter who sent her creations to MP Keith Ashfield and MP Woodward. She preferred to remain anonymous, lest her grandchildren die of embarrassment.

A Facebook page entitled Womb Swarm - Textile Artists United Against Motion 3-12 was set up with the idea to spur women across the country into action to knit, sew, or crochet uteruses to send to members of Parliament who are supporting Motion 312.

"This is a call to arms for proud vagina owners and allies who believe in a woman's right to choose. Let your fingers do the talking and get to the point...It is our hope to ensure that each supporter of Motion M-312 can learn to love vagina's by having a snuggly soft one of their own! Then perhaps they won't want to mess with ours!" says the group description.

So far the page has 244 members of all ages, both male and female, from around the country, clicking their needles in rage as they weave the vulva's into existence.

Although Prime Minister Harper said while campaigning in the last election the abortion debate in Canada is closed, it appears Woodworth, the member of Parliament for Kitchener Centre, is poised to open it with a special committee of the House on Thursday to consider motion 312.