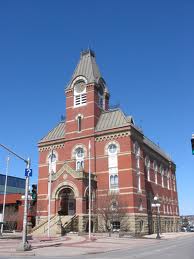 As mentioned earlier, the breaking story out of the City of Fredericton was Mayor Woodside saying the Public Safety & Environment Committee was going to discuss the ban of shale gas within Fredericton city limits during a meeting today at noon. The topic is something the City has been slow to make a decision on. But it looks like at the regular City Council meeting next Tuesday evening, they will do just that.

According to the City Clerk's office, who recorded the committee meeting today, a resolution on the ban of shale gas within Fredericton city limits was brought forward. It will be tabled for vote by all councillors next Tuesday at chambers.

Making a short presentation to the committee on the subject of shale gas today was local citizen, Mark D'Arcy, who's been agitating for the city to legislate a ban since last year.

He implored the committee to adopt a resolution to bring it to a vote at council. Barring that, he suggested to those present that councillors could put it on Tuesday night's agenda themselves.

Mayor Woodside also spoke at the committee meeting, saying, "...it should be dealt with now."

Councillors not presently sitting on the Public Safety & Environment Committee also attended the meeting, including Marilyn Kerton  and Stephen Chase. This tweaked D'Arcy that perhaps a shift had taken place on the subject with council.

"It was pretty electric in there," said D'Arcy about today's meeting. "Something changed; something is happening," he said.
at 5:05 pm