FREDERICTON - Occupy Fredericton protesters filed a statement of claim against Mayor Woodside and City Engineer Murray Jamer today at the Court of Queen's Bench, seeking damages for the breach of their legal rights and destruction of personal property, after the Occupy Fredericton shelter was forcibly dismantled by the City in early January.

A total of $16,600 in damages is requested by the plaintiffs, $15,000 for the infringement on their Charter rights, and $1600 for the seizure and destruction of personal property.

"...personal property...seized by Brad Woodside and the crew acting under his direction...were never returned to the plaintiffs, in spite of the plaintiff's requests," state the protesters in their claim.

Of note in the claim is the City's acting before the prescribed three days warning expired in it's own by-law. After issuing the protesters a warning on the evening of December 31st that their shelter would be removed, Woodside stood poised with Jamer's crews at 5 am on January 3rd to take down the Occupy shelter. However, the plaintiffs state that under section 22 of the Interpretation Act it is supposed to be four days. This paragraph of the claim also mentions that when the structure came down, a protester still inside, Kevin Holloway, was hurt.

The suit is just the latest in a contentious relationship between Occupy Fredericton and City officials. Throughout Occupy Fredericton's sit-in on City property downtown last fall and early winter, the Mayor and other City staff said they were running out of patience for the protest. Meetings between the two sides to come to an agreement about the shelter were tinged with frustration, culminating in the destruction of the shelter in January. 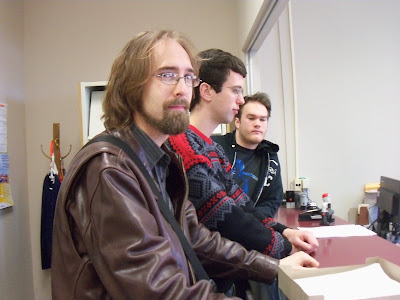