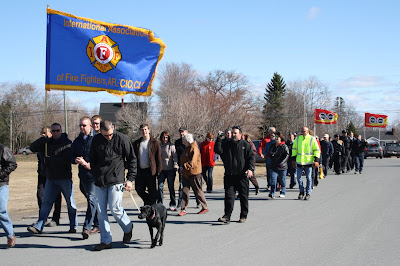 FREDERICTON - Striking airport firefighters gathered today in front of the Fredericton International Airport to march in protest against a recent order, they allege, was issued by airport CEO David Innes, calling for the removal of the professional firefighter insignia from their uniforms.
"Airport firefighters are firefighters. Same as the people who come to help if you have a house fire. But we have specialized training for the extreme conditions you can find in a fire at an airport, or in an airplane. What we don't understand is why we have no training budget, to keep our skills at the highest level, and now management has forced us to remove the symbol of our professional pride: our insignia," said firefighter Tony Cooper.

Union of Canadian Transportation Employees local 60601, representing firefighters and other workers at Fredericton International Airport, have been on strike since February 13, 2012. The union claims airport management is attempting to force all airport employees to be designated as 'Airport Operations Specialists' which means firefighters would fix snow ploughs and mechanics would fight fires.

Airport management was contacted but no one was available to comment on the firefighters claims due to the Good Friday holiday.