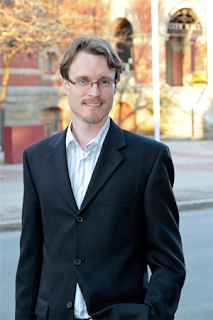 “Fredericton is a small city with big city traffic,” he said. “I see an opportunity to increase ridership on Fredericton transit, which would help reduce traffic at rush hour and save everybody money.”

Currently, only 3.7 per cent of Frederictonians use public transit to commute to work. Hayes wants to raise that percentage to at least 10 per cent. This potential could be reached by addressing the issues residents have with the transit system.

“Right now, the transit schedule is designed to cover a growing suburban base, which increases the operational costs of the bus system without providing incentives to use it,” Hayes said.

“As mayor, I would work to reorganize this system. I would be City Hall’s champion of transit.”

In front of the Devon Plaza on Thursday, Hayes also outlined his plan for improving Fredericton’s pedestrian base. “Fredericton is very pedestrian-friendly, but there is always room for improvement.”

He pointed out Union Street as an example. “The recurring concern that arises among residents here is how in 1.7 kilometres, there is nowhere for pedestrians to cross the street.”

These major thoroughfares are the places that City Hall needs to reconsider in their transportation agenda, Hayes said.
at 5:10 pm