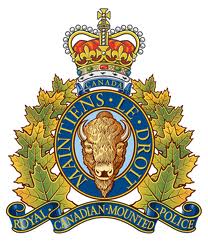 In honour of their continued dedication to policing and many years of service, the New Brunswick RCMP recognized 34 employees and police officers during a ceremony in Fredericton today.

"There are countless examples of how the work that our employees do on a daily basis is making a difference in the communities we serve," said Assistant Commissioner Wayne Lang, Commanding Officer of the New Brunswick RCMP. "This is an opportunity for us to step aside from our regular duties to recognize and celebrate those who have gone above and beyond what is required of them in their respective jobs." 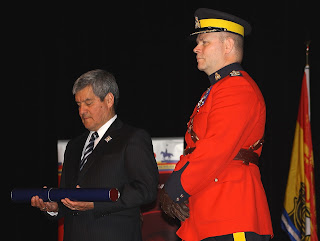 Long Service Medals, which recognize employees with 20, 25, 30 and 35 years of service and good conduct with the RCMP, will be given to 24 employees. In addition, a total of six Commanding Officer Commendations will be awarded to individuals who have exhibited bravery and/or outstanding service.

Two of the commendations will be awarded to members of the Fredericton Police Force for their actions during the rescue of a woman whose vehicle left Route 105 in Maugerville in January of this year, and went into the frigid waters of the St. John River. 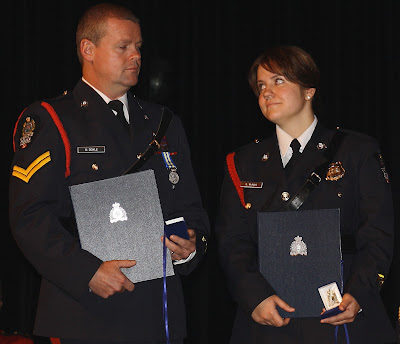 Cpl. Dwight Doyle, left, and Cst. Samantha McInnis of the Fredericton City Police exchanged a look after receiving bravery commendations from the RCMP today in Fredericton

Three members of the District 8 Acadian Peninsula RCMP will also receive commendations for their efforts in saving a man who tried to take his own life in May 2011. 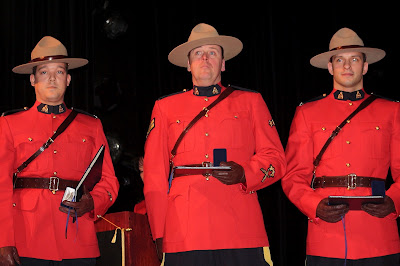 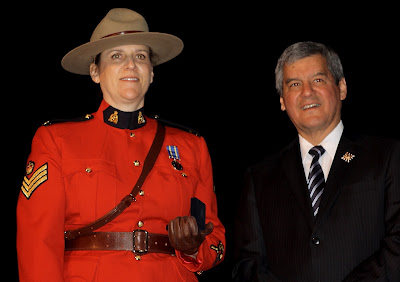 On March 6, 1934, King George the 5th authorized the RCMP to grant a medal, known as the Long Service Award, to it's members for 20 years of service and good conduct. After 25 years of continued loyal service, a bronze clasp is added to the medal. After 30 years, a silver clasp; 35 years, a gold clasp; with three stars and finally after 40 years, a gold and silver clasp with four stars. 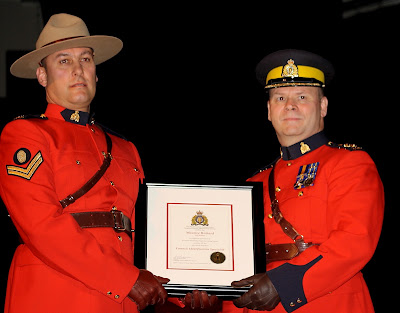 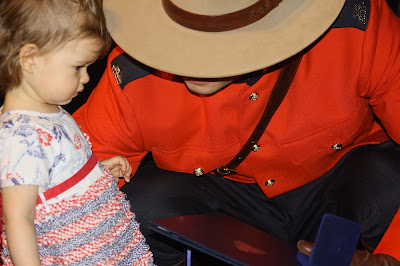