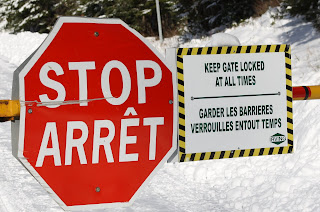 Local residents of Southwest Miramichi near Boiestown say bold signs and video surveillance placed by J.D. Irving Ltd. (JDI), claiming private property at the entry of traditional hunting and fishing grounds north of Holtville make them feel intimidated, especially since those grounds include Crown land the residents have a right to access.

"I don't think too much of it," said Bev Norrad, a native of the area who has spent a lifetime on the river and in the forests of the Southwest Miramichi. "The signs give an impression they (JDI) own it all when they don't, and that the locals should be kept out," he said.


According to Department of Natural Resources (DNR) official Timothy Houlahan, who oversees Crown lands on the Southwest Miramichi, JDI purchased private 'freehold' land from pulp and paper manufacturer Bowater around 2004. DNR boundary charts indicate this land is located just northwest of Holtville in York County. DNR records also show JDI was granted Crown license #6 by the province in 1982 which abuts the freehold land just across the line in Northumberland County. 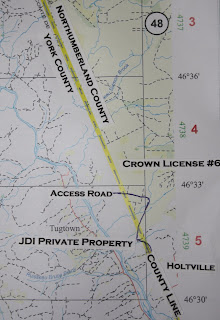 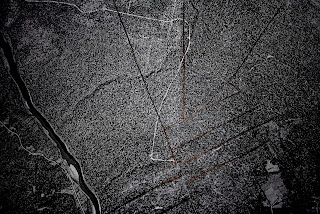 Crown land maps and aerial photographs gathered from DNR and Service New Brunswick show the provincial access road to the traditional hunting and fishing grounds runs north from Holtville exactly on the county line between York and Northumberland. It then swings left into York County onto the JDI freehold land where, after about half a kilometer, McKeil Gate is located with the signage and video camera that upsets locals. 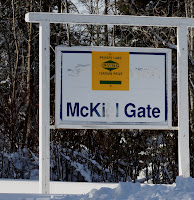 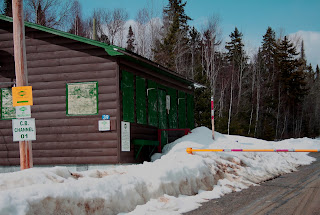 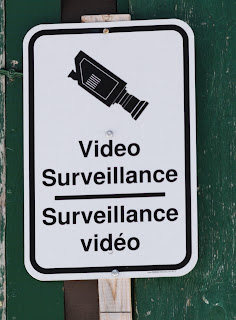 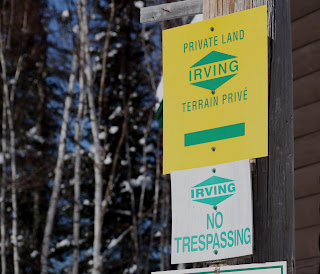 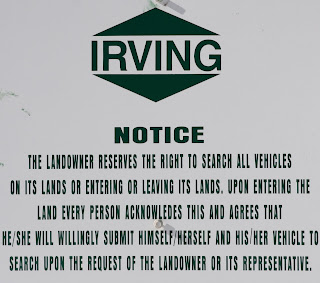 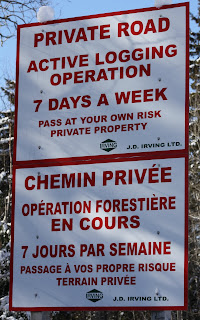 A few kilometers past McKeil Gate, the road winds onto Crown land license #6, eventually turning onto JDI private property. There is nothing posted by JDI or the province indicating the Crown land is open to public usage.


Kenton Kinney, Manager of Land Planning Crown Lands with DNR, said denoting Crown land is not something the department has ever done in terms of ownership.

There is also no onus on JDI as the private landowner to notify the public of the Crown land that abuts the freehold property. The only thing the company is required to do to satisfy DNR regulations is maintain the portion of road that runs through Crown license #6 because JDI trucks use it for logging operations.
Although the numerous signs and video camera at McKeil Gate give the impression JDI owns all the land in the area, only the private freehold land in York County is owned by JDI. The company doesn't own the land on Crown license #6 in Northumberland County. Houlahan said when a timber company is granted a Crown license, it only makes the company a 'licensee' of the land from the province, not an owner.

"In no way, shape or form do they (licensee) own it...the taxpayers of New Brunswick own it," he said. 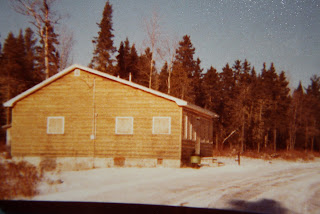 Shortly after JDI obtained the lands, the signs and camera went up where there were none before. With the previous owner, Bowater, once the public paid a small fee to access the land upon entry at McKeil Gate, they could hunt and fish virtually wherever they wanted on the private and Crown land without feeling uncomfortable. It was a sort of gentlemen's agreement where each side trusted the other in reasonable use of the land. Some locals still pay at the gate to access the Crown land for hunting and fishing, but they say they feel intimidated by the JDI signs and surveillance.

This false impression of full ownership also insults many locals, but they fear speaking out will lead to reprisals from the lumber giant such as being barred from going through McKeil Gate, leaving them no access at all to those fishing and hunting grounds their families have enjoyed for generations. Many of them also work for JDI and are concerned for their livelihoods. To them a way of life is seemingly under threat by a large multi-national corporation. Yet they feel powerless to do anything about it. Norrad, retired with no livelihood to lose, spoke out because he felt it important, but expects to be barred for doing so.

The Purple Violet Press contacted JDI communications manager, Mary Keith, who stated she would look into the matter and reply. However, there was no response by story deadline.


Post script:  Numerous francophone readers of the Purple Violet Press have voiced their annoyance with the JDI bilingual sign regarding the active logging road. They report several of the French words are incorrectly translated.

Editorial: The Great and the Good? 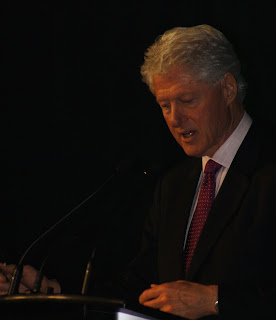 Recently President Bill Clinton visited Fredericton as the guest of TD Bank and it's deputy chairman, former Premier Frank McKenna. Giving a speech at UNB's Aitken Centre entitled, "On the State of our Global Economy", Clinton participated in a Q &A session afterwards hosted by McKenna.

The audience was predominantly a who's who of buttoned-up provincial politicos, business people, and professionals, distinguishable by their pinstripe suits and preoccupation with Blackberries. But when Clinton stepped onto the stage they came alive with clapping and cheering that led to a standing ovation, not stopping until Clinton voiced his thanks with a southern 'aww shucks' modesty in his voice.

Clinton held forth from his notes for little over a half hour on such topics as technological advances around the world, Canada's strong banking system, climate change and the poor in Haiti. While Clinton had a lot to say, it's what was missing from the tightly-controlled event that begs attention.

Although the public was allowed to take photos with cameras and cell phones inside the Aitken Centre during Clinton's visit, only one official photographer was seen to be taking pictures. No photojournalists appeared to be in the building. Three static video cameras captured the event on large screens at each side of the stage. But no TV media was anywhere to be seen inside. CTV's Andy Campbell was lugging a TV camera back to his truck long before the event started, while the CBC's Roy Gjelstad was relegated to catching people on their way out for their opinion of Clinton after it was over. Newspaper coverage was at a minimum with only one report by Canada East's Adam Bowie in provincial papers the following day. Citizen blogger Charles LeBlanc got to take in the event and posted a few items from inside, but claims he was hassled by the RCMP. According to TD 's senior manager of corporate communications, Stephen Hewitt, the media was kept out at Clinton's request.

Also missing from the event was seating for the handicapped with a vantage point where they could easily see the President. Aitken Centre officials said sponsors of the event didn't sell enough tickets for the handicapped sections so they were curtained off to make the building look full. Although the entire first row of seats on the floor in front of the stage were empty, those in wheelchairs were left to sit at entrances to the stands along the sides of the Aitken Centre. Not only was that dangerous, given the size of the crowd that would need to exit through those entrances in the event of an emergency, but ironic since in a speech that included mention of the less fortunate, some of the less fortunate from Fredericton were shunted out of the way of Clinton's view for cosmetic reasons.

University students were at a minimum during the event as well, even though several hundred free tickets were made available to them and high school students, said Hewitt. As for the poor getting tickets? According to Hewitt that was the university students.

Also absent was the topic of how much Clinton was paid for the appearance. "His fee is a private matter and we are not in a position to discuss it," said Hewitt. But even with hundreds of tickets given away, it's estimated 3000 tickets were sold at $100 general admission and $119 for floor seating, making approximate revenue of at least $328,500. Since Hewitt stated the event was designed to break even, it seems a hefty chunk of the money went to Clinton.

Another black hole was Clinton's neglect to mention his role in the meltdown of the very topic he was discussing, our global economy. In 1999, Clinton signed into law the Gramm-Leach-Bliley Act that allowed lending institutions to consolidate investing, banking and insurance all under one roof. It repealed the Glass-Steagall Act of 1933, which came into being after United States took a beating in the depression, to ensure consolidated banks would never again collapse to the point where it would bring the country to its knees. With the stroke of a pen, Clinton set into motion the deregulation of the credit card industry and the detested derivative swaps that ended up gutting Wall Street, the reverberations of which were felt around the world.

But the biggest black hole was host Frank McKenna's lack of questions on the speech Clinton had just delivered. There was no mention of the global economy or banking's role in the recession. Instead McKenna asked Clinton where he was when he got the news of Osama bin Laden's death. Granted, it was a big question on a lot of people's minds since Clinton's administration spent most of the 90's trying to capture bin Laden. But that was about it. After only 3 questions and a 35 minute speech, Clinton was gone. Did people really get their money's worth?

Judging by the enthusiasm of the crowd when Clinton and McKenna waved before leaving the stage, it appears they didn't care. It was a love-in where the past was excused and the two golf-tanned men sitting onstage exchanging jokes were adored for being small-town boys made good.

It's not often such greats come through Fredericton. Hopefully more high profile guests will come to town. But the local good should be less grateful for getting short shrift because although they can afford it, they need to speak up for others in the community who don't have the means to do so. Especially when the media can't get in to speak up for them.
at 9:11 pm 1 comment: