Glenfiddich rolls into town to the Lunar Rogue Pub 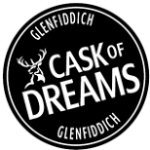 The Glenfiddich cask of dreams rolled into the Lunar Rogue Pub this evening in Fredericton, giving local Scotch enthusiasts a rare opportunity to be part of Glenfiddich history, and Scotch beginners a tasting lesson of an award-winning beverage.

In conjunction with Glenfiddich's "One Day You Will" campaign, 20 casks will roll through 10 Canadian cities to be inscribed by the public. Scotch lovers will finish the statement, "One day I will..." on the finishing cask of the Glenfiddich Limited Edition "Cask of Dreams" variant. After collecting the aspirations and dreams of Canadians, the casks will then return to Dufftown, Scotland to be filled with their new, limited edition single malt Scotch. Once bottled, the Cask of Dreams bottles will be shipped back to Canada for purchase. 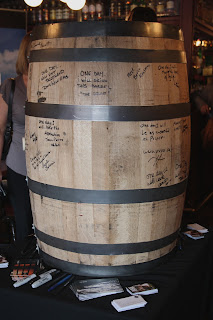 "When you write your dream on these casks, you're not only sharing a piece of yourself with Canada, but you become part of Glenfiddich's long-running history," says Beth-Anne Perry, Glenfiddich Brand Manager. "The dreams of Scottish pioneers are what shaped Glenfiddich and we can't wait to bring Canada's dreams back to Dufftown."

The roll-out started, fittingly, on Robbie Burns Day - January 25, 2012 - in Winnipeg, Manitoba. The casks will be rolled across Canada with the final stop in Vancouver on April 26th. The barrels will then travel back to Scotland and be used to finish the rare Glenfiddich single malt Scotch fo a minimum of three months. The spirit will be bottled and returned to Canada in time for this year's holiday season. 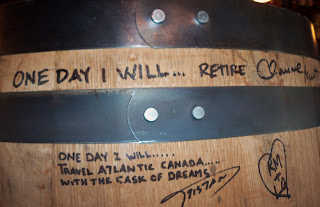 The evening's tasting lesson was a unique opportunity for beginners to learn about the culture and lore surrounding Scotch, while at the same time sampling a beverage with a pedigree reaching back 126 years.

William Grant and his seven sons built the first distillery at Glenfiddich, in the Highlands of Scotland, in 1886. The first spirits were produced on Christmas Day 1887. William Grant & Sons is an independent family-owned distillery operated today by direct descendants of the company founder. It is one of the very few remaining independent companies in the industry. 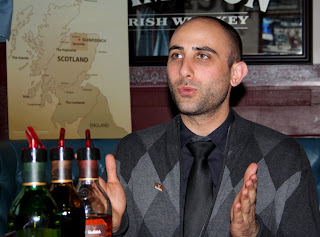 First up was a 12 year old fruity single malt with a hint of pear fragrance. It tasted sweet and developed into elements of butterscotch and cream, while betraying a subtle oak flavour. It finished off smooth and mellow. Lupovich reccommended this single malt be paired with smoke salmon and fresh oysters.

The 15 year old Scotch sample was like any teenager, complex and sweet at the same time. Its aroma ranged from scents of honey and vanilla, to rich dark fruits. Tasting of marzipan, cinnamon and ginger, this one was bursting with flavour, making a lingering finish. This Scotch is at its best paired with meat and cheeses. 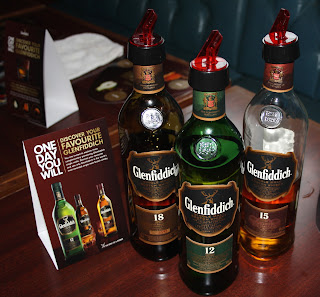 A robust, mature 18 year old single malt Scotch was the last in the trio to be sipped. Smelling of spiced apple and oak, this sample had a rich taste of candy peel and dates, proving to be the most popular among both the novice and experienced tipplers at the table. Finishing with a warm satisfaction, Lupovich suggested this blend be paired with tuna tartare or bacon-wrapped scallops.

Lupovich answered a common question asked by the general public on the subject of Scotch, that being, what is the difference between a single malt Scotch and a Scotch blend?

"A single malt Scotch is a product of one distillery and one distillery only," said Lupovich. But a blend is when companies have to have their product sent elsewhere for distillation purposes. 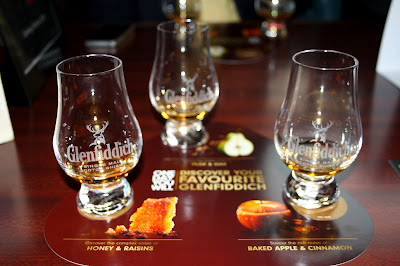 Unique to Glenfiddich is its use of water from one source at every stage of the whisky-making process. The water comes from the distiller's Robbie Dhu spring on its premises in Scotland.

It's oak casks also give Glenfiddich whiskies much of their flavour and colour, requiring skilled and experienced craftsmen to tend to the casks throughout their long maturation.


Most of the tasting participants were experienced imbibers of Glenfiddich. Lloyd Henderson is a long time fan of Scotch who usually enjoys his with a cigar, but unfortunately, he couldn't light up at the Rogue. (Apologies for the light quality in the video, too much sampling maybe)

Mayor Brad Woodside also attended the event, and although not a Scotch enthusiast, he nevertheless enjoyed a dram to help promote the cask's visit to City Hall tomorrow.

Between March 1st and July 31st, 2012, Glenfiddich will run an online contest in conjunction with Cask of Dreams for a chance to win a trip to the distillery in Dufftown, Scotland. Scotch enthusiasts can go to glenfiddich.ca/caskofdreams and complete the sentence, "One day I will..." The winning entrant will accompany their father or mentor to Scotland to witness the bottling of the limited edition single malt. 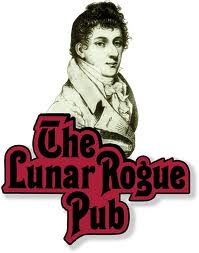