FREDERICTON – In the midst of a labour dispute centering on his management of Fredericton Airport, today airport Chief Executive Officer David Innes, in photo left, was revealed to have used airport resources to pressure employees to join the Liberal party.

Mr. Innes was then looking to secure the Liberal nomination in Fredericton. Airport management circulated Liberal party membership forms and other information to all airport employees.

Randy Munn, shop steward for the Union of Canadian Transportation Employees local 60601, the local that represents firefighters and other workers at Fredericton International Airport said, “It was inappropriate and a lot of the employees, including me, felt pressured to join. How would you feel if your boss sent you a letter like this?”

Mr. Innes, under fire for ordering airport firefighters not to wear their professional insignia and for reducing the training budget to zero, has been accused by striking union workers of improper use of airport snowploughing and other equipment during the two-month labour dispute.

Said Sprague, “Improper use of airport resources seems to be a problem for Mr. Innes. I am sending the relevant documents to the airport Board of Directors. I hope they will be as concerned about this abuse of Mr. Innes’ powers as I am, and ask for him to step aside.”

Several airlines have recently opened new cargo and passenger routes in New Brunswick; none have established operations in Fredericton.

New Democrat Leader Dominic Cardy said, “It is no surprise new airlines won’t fly to Fredericton. As a pilot I understand the standards the industry expects, this sort of blurring of the lines is not acceptable. It sends all the wrong signals to businesses looking to invest in New Brunswick. We have to separate politics and business, and that separation has to start at the gateway to our capital city.”

Below are the copies of the letters Innes sent around to airport staff: 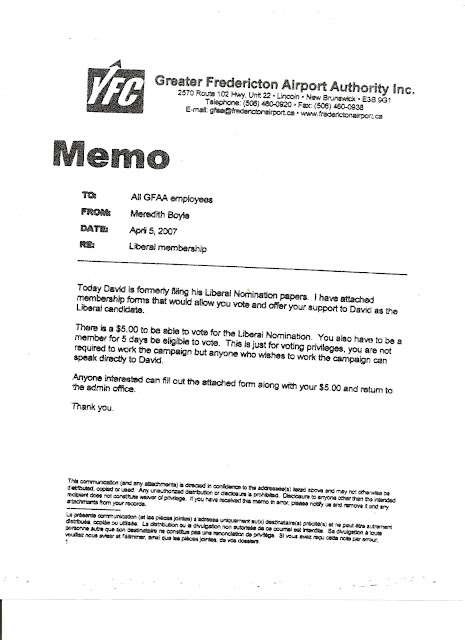 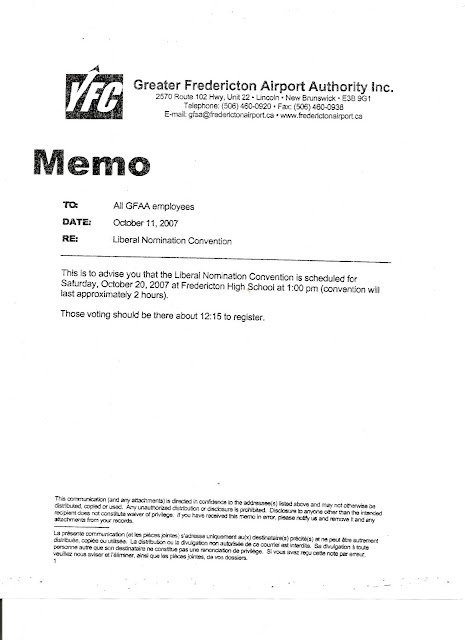