Earlier this week, the latest round of mining hearings took place in Sussex for two days between the Concerned Citizens of Penobsquis (CCP) and Potash Corporation of Saskatchewan (PCS). The hearings are to determine whether PCS is responsible for damaging the wells and property of several landowners in the community of Penobsquis, who are seeking financial compensation from the company.

On the second and last day of this session, Lawrence Wuest (far left in photo above), a retired geological spatial analysis expert called by the CCP, gave evidence of land subsidence in a report gathered from sources ranging from government geological surveys, to studies commissioned by Potash Corporation itself. 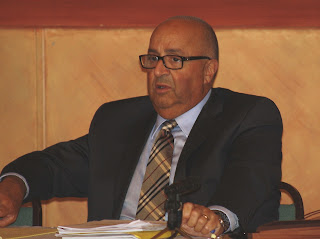 But legal counsel for Potash Corporation, Peter Zed (photo right), took issue with Wuest for not being an expert specifically in land subsidence, complaining several times to the commissioner about Wuest's lack of expertise.

"How can this be admitted when he's not an expert?" said Zed.

Zed aggressively questioned the legitimacy of Wuest's report, arguing it shouldn't be allowed as evidence since Wuest wasn't qualified to accurately interpret the data gathered in it. The commissioner, Roderick Duguay, let Wuest present his report, but Zed's questioning created a contentious atmosphere between the two men that led to bitter exchanges on more than one occasion during the day.

"Are you a hydrogeologist? Are you a specialist in rock mechanics? demanded Zed. "Would you let me answer the question!" snapped Wuest in one exchange shortly before the commissioner called for a break.

The CCP has had difficulty getting experts to testify at the hearing due to conflict of interest issues subsidence geologists around the province say prevents them from giving evidence. Bringing in outside experts isn't possible for the CCP, since they are a lay group representing themselves and can't afford the costs to do so. Some geologists don't want to be a part of the acrimonious dispute, others just don't care.

Since Wuest has experience analyzing spatial patterns on land surfaces, he felt qualified to be able to interpret subsidence data because it involves ground movement and changes in land levels. He offered his skills to the CCP in an effort to help them go up against what he sees as a goliath bearing down on a helpless community.

"In the end, it became evident that the only technical assistance available to the residents of Penobsquis would be from knowledgeable volunteers like myself," he said.

The CCP had legal representation in the hearings at one time in environmental lawyer Michel Desneiges, but dismissed him last year because of legal expenses and differences on how to proceed. Beth Nixon (photo left), although a complainant in the hearing, was the logical choice to lead the citizen's group since she'd been speaking on their behalf from the beginning.

“We feel that we’ve been treated very wrongly and to be able to ask questions to people that have done this to us is something we want to do,” said Nixon.

But it was clear from the proceedings on Wednesday afternoon the citizen's group is struggling with legal procedures when Zed, clearly frustrated, constantly called them on their confusion with re-direct after he'd cross-examined Wuest. Nixon asked him a question on procedure which set Zed off.

"I'm not going to tell you! I'm not your lawyer!" he said bombastically. 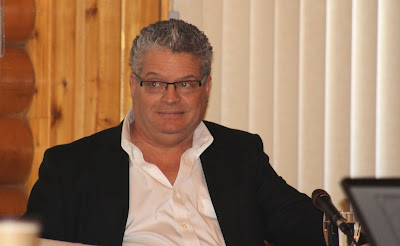 Commissioner Duguay (photo left) had to step in and explain the process to Nixon, who then moved on with her questioning.

Wuest continued to explain his findings with various interruptions from Zed, but got it across to those in the room that research points to Penobsquis being on the verge of becoming a giant sinkhole ready to implode like something out of a Hollywood movie. (See map below) 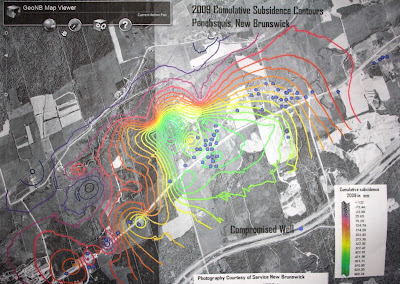 Since mid-2010, the hearings have been going on into whether Potash Corporation is to blame for the damaged wells and springs from land subsidence on local property. About sixty families in Penobsquis, near Sussex, New Brunswick, have wells that have gone dry. They now have to pay to have water brought in for their needs. Farms many families worked for generations have lost their natural springs that provided irrigation for crops and fed livestock. Several also have homes with structural damage due to the land shifting beneath, which they think is caused by mining operations underground. They are seeking compensation from Potash Corporation, whom they believe is responsible for it all.

The hearings are only the latest in an ongoing battle the community has been waging against Potash Corporation that began in the late 90s. But things really ratcheted up in 2004 when PCS undertook a round of seismic testing, including an area over top of their mining operation in Penobsquis. The mine workings roughly follow Route 114, the old Trans Canada Highway, in Penobsquis. This area was part of the seismic testing which included the detonation of dynamite charges. There were reports of homes shaking from the blasts, and homeowners finding muddy water the next time they turned on their taps. Residents quickly linked this to their lost wells and springs. Officials in the Provincial Department of Environment and Local Government also believed the mine was responsible for the dry wells and springs. While most attributed the problems to the mine, it was acknowledged that it would need to be proven.

After suffering years of frustration with inadequate water supplies of poor quality being trucked in to them (and having to pay for it), while bureaucrats bungled a proper water system, residents decided instead of taking the company to court, they would take their case to the province's mining commissioner. A rarely used option provided by the Mining Act, the mining commissioner is empowered to award financial compensation to the homeowners. But PCS can appeal the decision in court if he does so.

In the meantime, the hearings were adjourned until May 2 when both sides will meet to decide the next round of hearing dates, likely sometime in June.