SAINT JOHN - Over 100 party faithful and newcomers gathered in a ballroom at the Delta hotel in Saint John this morning, the second day of the provincial NDP convention in the city, to hear New Brunswick NDP leader Dominic Cardy, and the NDP leader of the federal Opposition, Thomas Mulcair, exhort the party forward to win the next elections provincially and federally.

"We can do better!" said provincial leader Dominic Cardy in his opening speech, expounding on NDP values of social welfare, good governance, and business innovation. 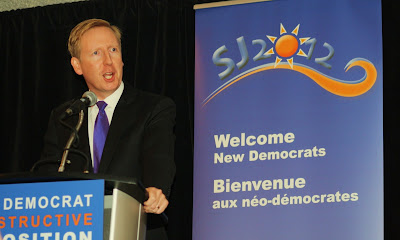 Cardy placed the NDP as the alternative to the old-style politics of both the Liberals and Conservatives, "...policies must change with the times...they are tools to solve problems...," he said.

Citing innovative approaches to education like the Part Street School in Fredericton where students help police bullying, Cardy said, "...[it] has changed how schools connect to community...," he said. 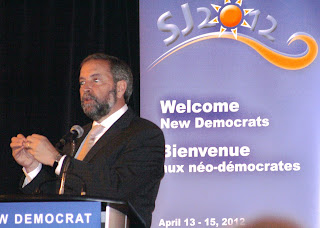 Mulcair began by saying the rise of the NDP in New Brunswick, which now sits at 30% in popularity here, is making inroads by uniting different communities in the province. Also, Mulcair wants the NDP to tap the youth across the country, a demographic disenchanted with politics and don't vote.

"It's no coincidence Harper scheduled the last election for May 2, catching students busy finishing their term and getting ready for summer jobs," said Mulcair.

"The OAS was an arrogant decision announced [by Harper] amongst billionaires in Davos, Switzerland...he didn't have the courage to say it in Canada," said Mulcair.

Taking the Harper government to task on its action towards the Wheat Board, Mulcair said, "...Going after the Wheat Board puts farmers at the mercy of market ups and downs." He added, generations of farmers will suffer.

Being the former environment minister in Quebec who helped bring in the moratorium against shale gas in that province, Mulcair spoke specifically to the actions of the Alward government on the file here.

"...it's about the method being applied and secrecy. They're lying about...the chemicals," he said.

Taking a further swipe at the Harper government for broken promises, Mulcair ended his speech by saying the fight between the NDP and Conservatives is about the fight for jobs for Canadians.

"The battle will be a discourse on jobs because cuts are an attack on jobs."

The NBNDP 2012 convention runs until tomorrow, Sunday April 15. Final resolutions will be discussed and Robert Chisholm, MP for Dartmouth-Cole Harbour and former leader of NSNDP, will deliver the keynote speech. The gathering is expected to wrap up at noon. 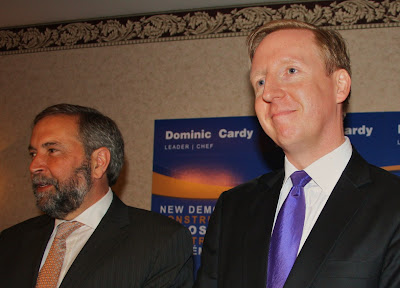