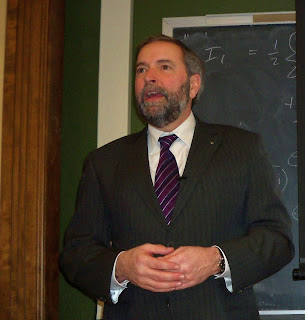 FREDERICTON – New Brunswick’s New Democrats are pleased to announce the line-up of guest speakers for SJ2012, the party’s biennial convention, to be held from April 13-15, 2012, at the Delta Hotel in Saint John.

The Leader of her Majesty’s Official Opposition, Mr. Thomas Mulcair, will be making his first visit to New Brunswick since being elected leader of Canada’s New Democrats on March 24.

Mr. Dominic Cardy, Leader of New Brunswick’s New Democrats, and Mr. Mulcair will be speaking between 1000 and 1100 on Saturday, April 14.

The media are invited to attend; doors will be open from 0930 until the speeches begin at 1000. Mr. Mulcair and Mr. Cardy will be available to the media following the speeches in a media room adjacent to the Convention hall.

Hon. Mat Whynot, MLA for Hammonds Plains-Upper Sackville, Nova Scotia, and Government Whip, will be speaking on Saturday, April 14, at 1430.

Hon. Robert Chisholm, Member of Parliament for Dartmouth, and former Leader of the Official Opposition in Nova Scotia, will be speaking on Sunday, April 15, at 1030.
at 1:39 pm