Royal Visit 2012 - Touching moments with the royals in New Brunswick 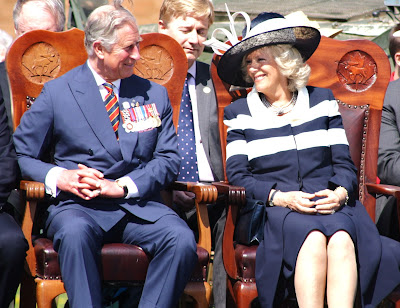 SAINT JOHN - Although the Prince of Wales and the Duchess of Cornwall have completed the New Brunswick leg of their journey, they left behind special memories for many New Brunswickers.

From simple handshakes and smiles, to bestowing commemorative Diamond Jubilee medals, the visit by the royal couple will not soon be forgotten by this province.

Making those special memories were the touching moments on the tour that came about unexpectedly for the public on hand at events. Some happened as planned surprises by tour organizers, others were spontaneous demonstrations that endeared the couple to the crowds.

In Oromocto and Saint John, Diamond Jubilee medals were awarded by surprise to two recipients who had no inkling of what they were in store for. They were given one of 60,000 medals that will be granted throughout the Diamond Jubilee year in celebration of the Queen's long years of service. In keeping with the theme of service, the medal is to recognize those who have volunteered their time helping others in their community. 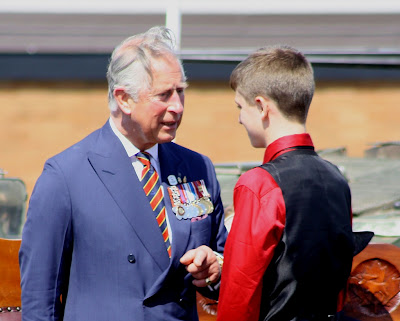 Thirteen-year-old Marshall Howard (photo left in red) was called to the dais during the welcome ceremony for the royal couple in Oromocto, and was bestowed the medal by the Prince of Wales.

Howard received the medal for his promotion of wearing red on Friday for the troops, and raising money to help military families.

"I didn't even know I was getting it until [CFB Gagetown Commander] Col. Rutherford called this morning," said Howard. "My mum didn't tell me."

Another touching moment came during the last royal engagement of the New Brunswick part of the tour in Saint John. 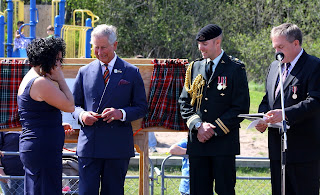 Hazen White-St.Francis school principal Jennifer Carhart (photo right in navy dress) thought the visit by the royal couple to her school was over with the unveiling of a plaque commemorating the school's new computer centre.

But she got the surprise of a lifetime when Premier David Alward continued his speech, announcing she had been awarded the medal for her service and dedication to education. 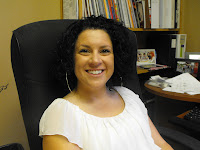 "...she represents the best of New Brunswick," said Premier Alward, himself choked up by the moment with the telling break in his voice as he concluded his speech. 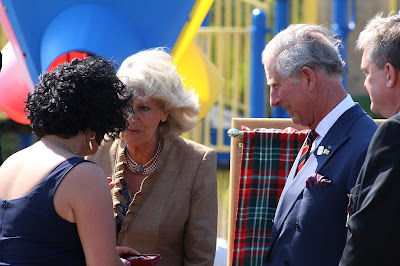 Fighting to keep her composure in front of her students and their parents in the crowd, Carhart was given the medal by the Prince, who smiled with pleasure as he congratulated her. Both the Prince and Duchess continued their congratulations as the shock was absorbed by Carhart.

A touching moment that caught the Prince off guard was during the welcoming ceremony for the royal couple at CFB Gagetown. He was given a standing ovation by dignitaries and those in attendance before he began his speech at the podium. 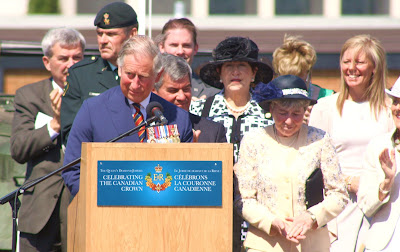 Looking to his left and right at the crowds seated beside the dais, the prince was at first perplexed by the extended applause, only to realize why as they stood up. The prince's look of humility earned the affection of both dignitaries and the public on hand.

It was a hard-won moment for the prince, having clawed his way back to respectability in the past decade after being castigated by press and public alike in the nineties for his affair with the Duchess behind the back of his first wife, Princess Diana. The subsequent blame he endured after the Princess's death in a 1998 car crash during a visit to Paris with her boyfriend further hampered the rehabilitation of the Prince's image. Many said the Princess wouldn't have been in Paris with another man had Charles remained a loyal husband in the first place. 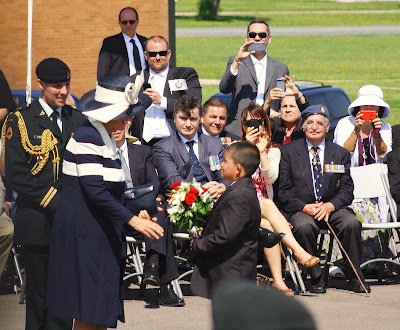 But all that was forgotten yesterday as the royal couple made their rounds. One who  looked especially tickled to see them was ten-year-old Walter Brooks, a flower presenter at the CFB Gagetown ceremony.

Brooks was recently recognized by St. Mary's First Nation as a top performer at  a recent charity fundraiser and so was tapped for yesterday's ceremony. He could be seen diligently practicing his presentation before things got underway. 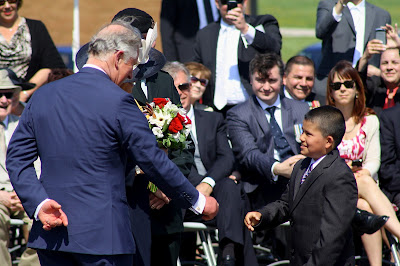 Looking smart in a suit and tie, he smiled a dimpled grin as he gave a beautiful bouquet to the Duchess. In an unusual move, the Prince also leaned in and shook Brooks' hand. The two chatted him up for a minute, giving the youngster something to remember for years to come. Meanwhile, members of the public snapped away, capturing the exchange on their cell phones.

A moment that really stands out in the royal visit that gained the Prince a wellspring of goodwill was his attempt at playing a bit of ball hockey yesterday at Hazen White-St. Francis school in Saint John.

Just before awarding the Diamond Jubilee medal to principal Jennifer Carhart, the Prince jumped in to take part in a little shinny some kids were playing in the parking lot as he went by. At the risk of losing his dignity, the Prince showed good humor, scoring a goal in the process.

After Carhart received the medal, the Prince and Duchess were gone. They had a plane to catch for Toronto, and the next leg of their three-day whirlwind trip to Canada. But it's was obvious they gave New Brunswickers much to remember in the days to come. 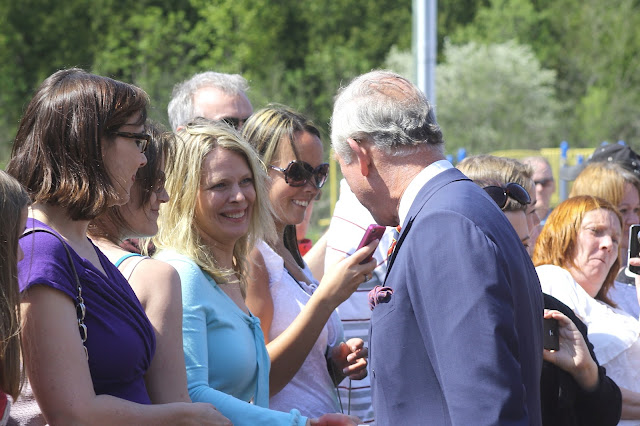