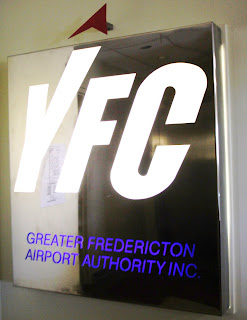 FREDERICTON - Fredericton International Airport Authority (FIAA) has filed for federal arbitration to end the nearly three month old strike by the airport's maintenance and support staff. John Hamilton, Director of Marketing and Business Development, says this move follows failed attempts over the last month to get the Union back to the negotiating table.

“Despite the union’s public protestations to the contrary, this union has no desire to get back to the bargaining table. We worked very hard with the federal mediator last month to restart negotiations but they have no appetite to meet face to face,” according to Hamilton.

Twenty-five members of Local 60601 of the Union of Canadian Transportation Employees (UCTE) provide operational services, including clearing the runways, maintenance and emergency services. They went out on strike February 13, citing poor working conditions that include bullying and harassment.

Since an essential services contract is in place at the airport, fifteen of the twenty-five unionized workers are called in when needed, lessening disruptions for the traveling public. In cases of emergencies, essential staff are on-site. Management has also been doing some the work in the absence of workers.

Both sides have made concessions but still remain apart on a number of issues. “It’s a shame really,” says Hamilton.  “We believe we can get to the union figure by linking salary performance to passenger increases but they remain uninterested. And we have a number of solutions for other issues but they will not listen.”

This morning, management filed it's application with the Canadian Industrial Relations Board (CIRB), a federal labour body that will decide whether to appoint an arbitrator to iron out the dispute. If it does, both sides will go before the arbitrator, who will hear the issues, then make a binding decision for both parties.

The Fredericton International Airport Authority (FIAA) believes that arbitration is the only way to end the strike. “The reality is that both sides have the capacity to go on for years,” Hamilton points out. “This is not in the best interest of the community.”

But the union can request the arbitration application be rejected, something management will have to consider if the union chooses to go that route.

“We would prefer a negotiated settlement as that would be a win win solution for both sides,”  Hamilton adds.

John Hamilton, above, Director of Marketing and Business Development at the Fredericton International Airport Authority, discusses the back and forth that led to seeking arbitration

The union, for it's part, claims it is management who has been reluctant to come to the bargaining table.

Nancy MacLean, the Public Service Alliance of Canada (PSAC) Atlantic representative, who was at the airport supporting the strikers today, referred to the absence of the mediator as an indication of management's unwillingness to sit down at the table.

"The mediator won't come to Fredericton to mediate until both sides show a willingness to move; management hasn't done that so the mediator sees no point in coming here," said MacLean.

As for the FIAA filing for federal arbitration this morning to end the strike, MacLean couldn't comment since no notification had yet been received by the union's negotiating team when speaking to this publication.

Larry Gagnon, the union negotiator, was enroute from Saint John and had yet to be informed of the announcement.

But there was speculation by some strikers the reason the FIAA is suddenly going to arbitration is due to the impending Royal Visit by Prince Charles and his wife Camilla, announced yesterday by Ottawa. They are due to arrive in the province on May 21, beginning the first leg of their tour at CFB Gagetown.

"The Royal Family won't cross picket lines and if they don't land here in Fredericton it's a real loss for the airport; they will have to go to Saint John or Moncton," said one striker.

This would seem to be confimed by Hamilton himself, who, while fielding calls on the arbitration issue this morning, was overheard to say he, "...wants to get it dealt with before the Royal Visit."

A call was put in to the Monarchist League of Canada to confirm whether or not the royals avoid pickets, but as of publication, no response was received.