FREDERICTON - About 100 people attended a public debate on shale gas at the Christ Church hall in downtown Fredericton last evening to hear arguments for and against fracking for natural gas in the province. The debate was organized by lay members of the public in the spirit of government information meetings designed to educate locals on the issues surrounding the burgeoning shale gas industry in New Brunswick.

The public was eager to hear from invited members of government, industry and business on the pro side of the issue, including Premier Alward, Natural Resources Minister Bruce Northrup, Environment Minister Bruce Fitch, SWN General Manager Tom Alexander, Krista Ross from the Chamber of Commerce, and Canadian Association of Petroleum Producers lobbyist, Angie Leonard.

However, the public was disappointed as that side of the panel sat empty all evening. Several on the pro-side had prior commitments and were unable to attend, sending regrets earlier in the week to the organizing committee.

"I think it's kind of sad to see that no elected representatives showed up tonight [to sit on the panel]," said Ian LeTourneau, (above), candidate for Ward 6 in Fredericton's municipal election. 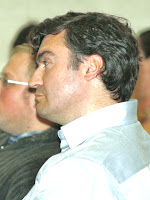 Invited to speak for government in the debate, Conservative MLA for Fredericton-Silverwood, Brian MacDonald, was in attendance but sat in the audience. Before the debate began, MacDonald was seen trying to remove his name sign from the pro-shale gas table, but was prevented from doing so by organizers.

MacDonald spoke to this publication at debate's end, (below), saying he'd attended to help inform himself due to concerns over water issues. He also added he'd be taking what he learned back to government. 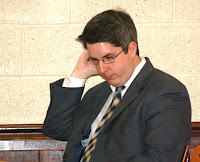 Jacob Baisley, (right), Executive Assistant to Craig Leonard was in attendance, sitting in the audience taking notes throughout the evening.

No industry or business people invited to participate in the pro-shale gas side were in attendance; neither at the debate table or in the audience.

But the show went on, with organizers having a member of the lay group, Mark D'Arcy, (left), use government texts already in the public domain to answer debate questions posed to the pro-shale gas side. 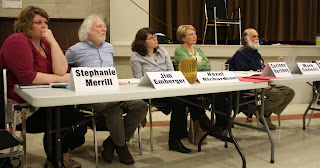 Close to a dozen people came to the mic to make their inquiries over the three hour event. They were volleyed back and forth to each side by debate moderator and STU professor, Dr. Jean-Louis Deveau, while Gary Guild kept track of time allotted to answer by each side.

Common questions regarding well water safety and the economic benefits of shale gas to the province were posed to debate panelists.

But of particular interest were comments made at the mic by Shawnee Main, (left), a Fredericton firefighter and recent Diamond Jubilee medal recipient for volunteerism. She discussed her concerns for emergency personnel in the event of accidents at well sites, including exposure to hazardous chemicals. She also cited increased stress from having to deal with potential negative events surrounding the industry, such as vehicle accidents due to the large volume of trucks hauling materials to and from well sites.


In between questions, politicians of other stripes in attendance were invited to speak to the audience at the lectern. Dominic Cardy of the NDP, (below), spoke of being against the old way of doing things by government and industry, while Fredericton Green Party representative Louise Comeau discussed the party's opposition to shale gas development.


Candidates for the municipal election were also in attendance with Mayoral contender Matthew Hayes, (below), taking the lead re-inforcing his position on a shale gas moratorium, while Ward 10 aspirant Ryan Jacobson openly spoke about his stance against shale gas. 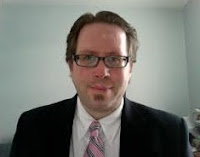 Other candidates spotted in the audience were Greg Ericson, (left), vying for Skyline Acres Ward 8, and as previously mentioned above, Ward 6 candidate Ian LeTourneau, (right).


The organizing committee of the public debate are considering holding other similar events around southern New Brunswick. Details will be released to the media as they come together.