Photo exhibit on effects of mining on communities starts today 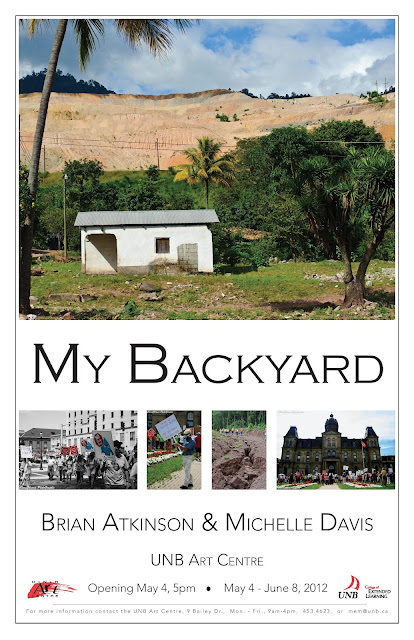 My Backyard: Brian Atkinson and Michelle Davis
The effects of mining on community life explored at the UNB Art Centre
May 4 to June 8, 2012

Brian Atkinson and Michelle Davis are New Brunswick-based photographers who use their lens and their social awareness to tell the story of mining and its impact on communities and their environments.

My Backyard: Brian Atkinson and Michelle Davis on exhibition from May 4 to June 8, consists of color photographs of rural communities in Honduras and New Brunswick. Atkinson’s work captures the faces and landscapes of St. Andres, Honduras in the midst of a local controversy over gold mining in the area, while Davis documents the effects of mining in Penobsquis as well as the anti-shale gas exploration protests in the rest of the province.

While their messages are similar, these artists are on opposite ends of their photojournalism careers. Atkinson has been a freelance photographer for more than twenty-five yeas, in over seventy countries, for a variety of magazines, newspapers and international aid agencies, including CARE, CUSO and MSF, while Davis’ exploration of the media has just begun.

Michelle Davis has been the owner of ChoraChroma PhotoGraphic, a photography studio based in Fredericton, for the last two years. Her work has recently expanded into photojournalism. She began following the ant-shale gas movement over a year ago when a hydro-fracking company announced that they would be setting up operations in her hometown of Astle, near Boiestown. She photographed the initial rally that was organized to protest exploration in Penobsquis and since then has covered a number of shale gas protests.

My Backyard: Brian Atkinson and Michelle Davis opens on Friday May 4 at 5 p.m. Admission is free and everyone is welcome.

The UNB Art Centre is located at Memorial Hall, 9 Bailey Drive, University of New Brunswick, and Fredericton Campus.
at 12:12 pm