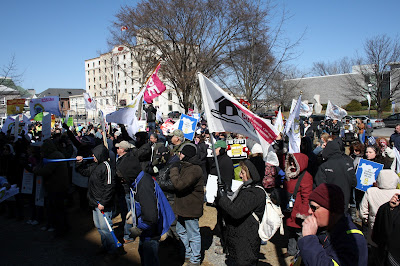 FREDERICTON - Hundreds of the province's unionized workers protested on the lawn of the Legislature in Fredericton today while Finance Minister Blaine Higgs brought down the budget inside. Bussed in from around New Brunswick, they wanted to air their concerns about the poor bargaining climate in the province. Many unions are at loggerheads with managements over outstanding contracts. Some of the disputes have dragged on for months.
The protesters also wanted to make it known to government on budget day they're worried about future cuts to the civil service around the province. Although this latest round of job cuts by government are through attrition over the next few years, that doesn't eliminate the possibility down the road, making it difficult for families to plan for the future.

The raucous union crowd makes noise in front of the Legislature today while Finance Minister Blaine Higgs delivers the budget inside. 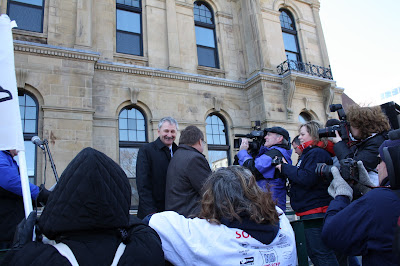 Before delivering his budget, Minister Higgs, (centre grey hair in photo right), appeared on the podium with CUPE NB President Danny Legere, shaking hands and exchanging a few words, but making no statement to the crowd. He was accompanied by Transportation Minister Claude Williams and various handlers, while the media swarmed to capture their presence at the protest.
Legere later divulged the details of his exchange with Higgs on the podium, and detailed what protesters hope the demonstration today will accomplish, as seen in the video below:
But according to Higgs later in the day after delivering the budget, he didn't understand why the protesters were rallying. Due to audio issues in the video below, it can't be heard, but towards the end, Higgs states, "I'm not sure what they were protesting about." See for yourself:
Numerous union organizations were represented on the Legislature lawn, ranging from big hitters like CUPE and PSAC, to the smaller provincial Federation of Labour and ATU. 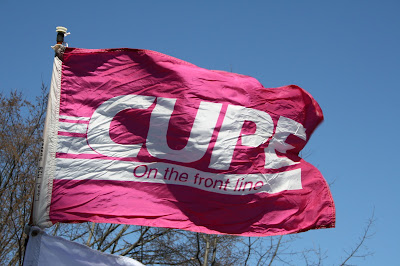 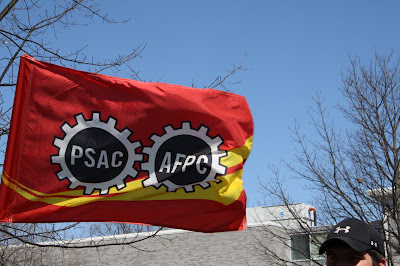 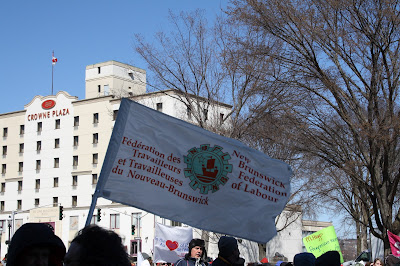 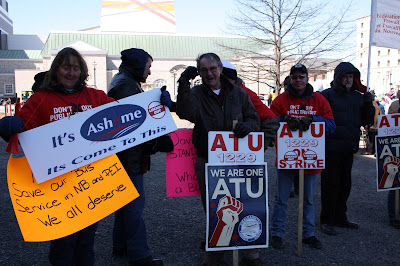 Some protesters took a break from the demonstration to get warm at the Crowne Plaza hotel across the street from the Legislature. Just inside was Odette Robichaud, president of CUPE local 1840, representing court stenographers around the province. In the video below, she weighed in with her concerns about the upcoming budget and what she hopes the protest will highlight:
The various protesters on hand represented unionized employees around the province who provide government services, including school custodians, bus drivers, teaching assistants, licensed practical nurses, nursing home staff, fire fighters and NB Liquor employees. 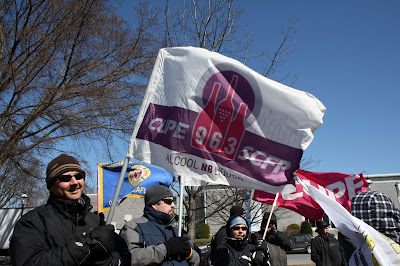 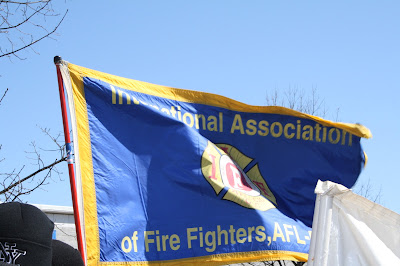 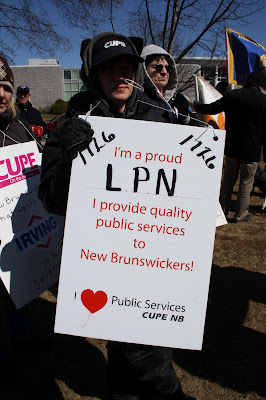 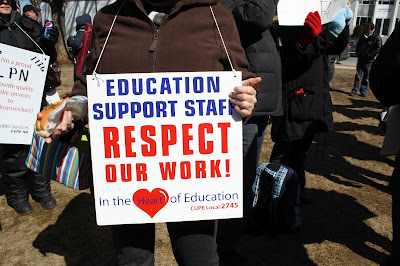 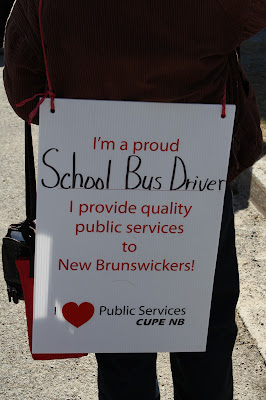 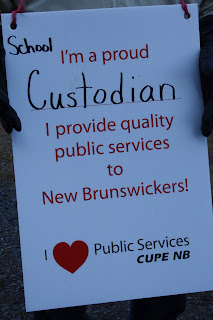 Michel Boudreau, President of the New Brunswick Federation of Labour rallied the protesters today at the Legislature. He outlined his frustration with the Alward government's taxation scheme in the video below:
The New Brunswick Common Front for Social Justice was also present at the Legislature today, making its feelings known on the issues affecting the province's poor impacted by the budget. The group is pressuring the Alward government to carry out it's poverty reduction strategies outlined in the 2011 budget, helping seniors and others on fixed incomes, as well as providing affordable dental care for children living in poverty. 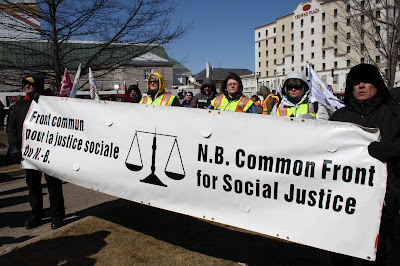 From providing for people in the days of the bread lines, to feeding them today on the hot dog line, union members and the less fortunate in the public were given a meal today to help get them through the protest, while a biting cold wind whipped across the Legislature lawn. Donations to local food banks were also collected to help the working poor and the unemployed. 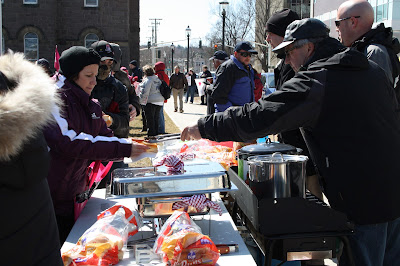 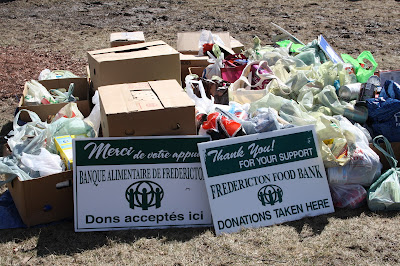 And while the unions provided plenty of signage for members to wave during the protest, many had their own  message. 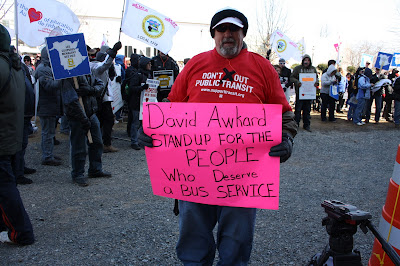 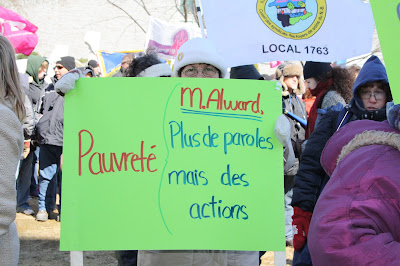 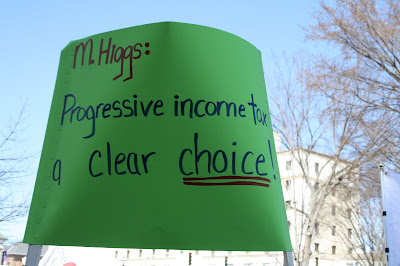 Like the shale gas issue, the elimination of jobs cuts across all linguistic lines in New Brunswick, uniting people rather than dividing communities. Both official languages could be heard around the Legislature today as unionized workers rallied to make the government hear their concerns about the budget, managements bargaining in bad faith and potential job losses in the years to come. 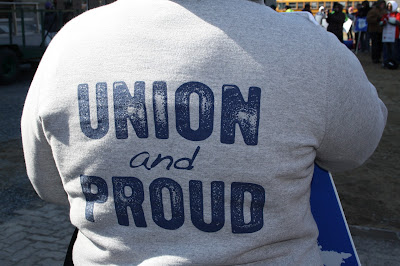 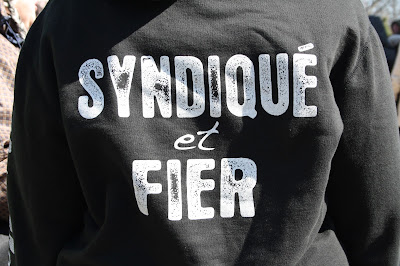 At the end of the day after the budget was tabled, Premier Alward was walking back to his office. He gets the last word on the protest today:
at 1:06 am