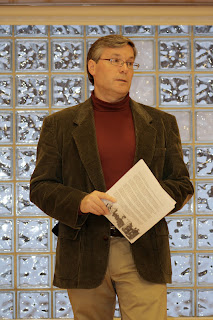 Fredericton anti-shale gas activist Mark D'Arcy was invited by the New Democrats to give a public talk on shale gas last evening at the St. John the Evangelist Church in the city's northside. D'Arcy's talk countered claims made in a provincial flyer circulated around the province last fall to inform New Brunswickers about the industry. 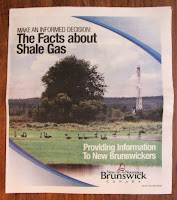 D'Arcy laid out his own facts at issue with information found in the flyer, using them as talking points to flesh out his lecture. He pulled his information from research by academic and industry experts, as well as scientific publications.
The small but interested group of community members assembled for the talk listened as D'Arcy argued with aspects of the government information, including the three detailed below. 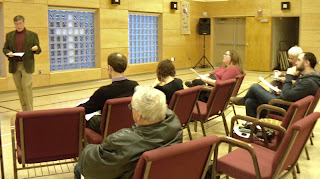 He pointed out the statement on page 2 describing the fracking process as being used for decades in the province which is not the case, calling it a "false and misleading statement...This myth combines a truth that the industry has been hydraulic fracturing formations for 60 years, but ignores the fact they have only been hydraulic fracturing shale for 15 years."
D'Arcy also refuted the claim in the flyer on page 3 that, "Most of the chemical additives used are also found in common household products." He disagreed, detailing a number of chemicals scientists have found in the fracking fluid solutions. "This statement is simply untrue, given that these additives include highly toxic compounds such as diesel fuel, benezene, toluene, and xylenes. Some of these chemicals are found in paints, paint strippers, lubricants, and glues - products that would not be considered common household products."

Close to D'Arcy's heart is the issue of wetlands around the province, specifically in the UNB woodlot area at the top of Regent street in Fredericton. He points out the government fallacy in regards to groundwater contamination that, "The likelihood of this occurring is remote given the depth at which hydraulic fracturing for shale gas is typically occurring and the distance to drinking water aquifers." D'Arcy is concerned drinking water will become tainted with carcinogens in areas of high shale gas development, saying, "...the vertical well has already punched a hole through the aquifer. It is irrelevant how far the well is drilled because the fracking will cause the water to come back up teh well hole. Well integrity failure can cause contamination to travel vertically up until it reaches the groundwater."

In a question and answer session that followed up D'Arcy's talk, members of the public present posed questions to D'Arcy, such as what can the province do to pull itself out of its massive debt, other than have industries such as shale gas to help. D'Arcy pointed out western economies such as Germany are already taking steps to prepare itself for the new greener energy reality coming in the future. "They're working to end their reliance on nuclear energy...something where they're ahead of other G8 nations in doing so," he said.


Chris Smithsart, an attendee at the talk last evening, said he would like to see shale gas be run and used by New Brunswickers for the betterment of the province, instead of the product being shipped out to other markets by multi-national corporations.
In speaking to this publication about his talk last night, D'Arcy said, "It is important for the public to understand the reasons why a ban on shale gas development is necessary.  Similar to the "doubt is our product" campaign waged by the tobacco industry, we have to counter the deliberate misinformation and false statements spread by the shale gas companies and our own government."