FREDERICTON - Members of Local 60601of the Public Service Alliance of Canada's Union of Canadian Transportation Employees (UCTE) held a march at the Fredericton Airport today, in hopes of rekindling negotiations with the Fredericton International Airport Authority (FIAA) management board after talks recently stalled.
Gathering at the entrance to the airport, members and supporters wound their way through the airport terminal. It ended with a rally back at the entrance where Public Service Alliance of Canada (PSAC) national president, John Gordon, exhorted the crowd to keep up the fight.
PSAC rep Anna Goguen, NB Federation of Labour President Michel Boudreau and UCTE negotiator Larry Gagnon introduce PSAC national president, John Gordon.

Without a contract for almost three years, union members went out on strike February 13th after attempts at mediation broke down. The union blamed the FIAA board for failing to return to the bargaining table for face to face discussions as the trigger for the strike.

“We are disappointed that at such a critical time, the employer, contrary to public statements, did not come to mediation prepared to negotiate,” said UCTE Regional Vice-President Wayne Fagan.
The union is looking for a contract to settle issues related to compensation and classification. The employer has also yet to withdraw clawbacks the union finds unacceptable. Members say they're also looking for better overall working conditions, citing bullying by management as affecting the workplace atmosphere.

Wayne Fagen, regional vice-president of the UCTE discusses what union hopes to accomplish with march and at negotiating table

Last Friday, a delegation of three union members visited the offices of the FIAA Board of Directors. Later that day, they set up a secondary picket at the Hilltop Restaurant to put pressure on owner and board member John Kileel.  Strikers, supporters from the university sector, members of the PSAC and CUPW then moved their line to the office and home of the chairman the board Brent Melanson.
“It is time the Board of Directors lived up to its obligations to the citizens of Greater Fredericton and settled this strike,” said Jeannie Baldwin, Regional Executive Vice-President of the Public Service Alliance of Canada.
Spokesperson for the FIAA, John Hamilton, said six managerial staff are expected to perform the duties of the striking maintenance employees. In addition, fifteen unionized workers considered essential under their contract, are in place to ensure minimal flight disruption.
"Any baggage handling, check-in, de-icing of aircraft and everything else is not affected at all...All essential services, like making sure runways and everything are open, will go ahead as normal," Hamilton said.
Contrary to FIAA claims, the union advised the traveling public that the strike could disrupt airport operations and access to the airport. The public and all union members were asked not to cross the picket line.  Anyone planning to travel was encouraged to use Saint John and Moncton Airports during the strike.
Local 60601 members provide operational services, including runway clearing, buildings and equipment upkeep, fire, security and emergency services, as well as administrative and billing services. 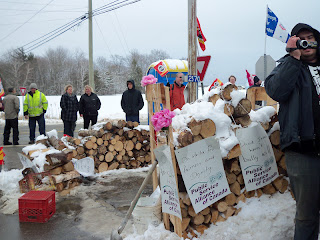 A makeshift shelter and port-a-potty plastered with signs and flags of union support stand at the entrance of the Fredericton International Airport where Local 60601 of the Union of Canadian Transportation Employees held a march today. Members hope the rally will force talks to resume with management which have stalled recently after the strike began five weeks ago.