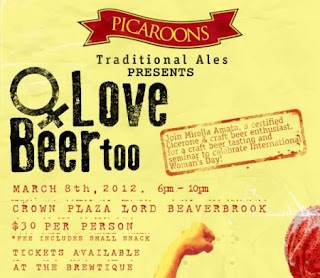 Close to 100 women (and three brave men) turned out to learn something about the history of beer, and sample it's modern-day wares evolved from thousands of years of brewing, last night at the Crowne Plaza hotel in Fredericton. Sponsored by Picaroons brewery, The Women Love Beer Too event was all for a good cause, with proceeds going to the Art Reach Program at the Fredericton Arts and Learning Centre.

Beer sommelier Mirella Amato schooled the crowd on the relationship between women and beer throughout history, while at the same time analyzing eight ales over the course of the evening with the audience. It was a fascinating discovery about women that reached back in time through a beverage with basic brewing practices that haven't changed much from those recorded on tablets recovered from early Mesopotamia, circa 2000 BC. 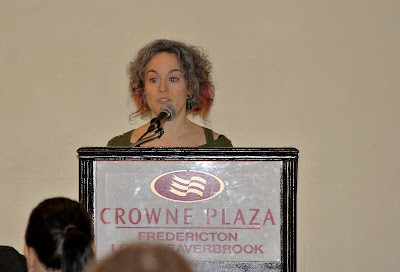 Beer sommalier, or cicerone, Mirella Amato, above, discusses the history of women and beer Thursday night at the Crowne Plaza in Fredericton.

"They [the Mespotamians] worshipped a female diety called Nin-kasi, thought to be the brewer to the gods. So, beer making was done by women. It was also seen as part of the diet and kitchen duties," said Amato. 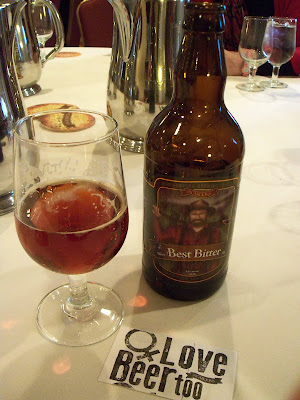 The ancient Egyptians also had a goddess of beer called Hathor, related Amato. Hathor was orginally named Sekhmet, daughter of Ra, the sun god. When the people began to criticize his rule, Ra sent Sekhment to defend him. But she slaughtered people by the hundreds. When Ra asked her to stop she refused, such was her lust for blood. Ra conceived of a clever idea to end her rampage by coloring beer red. He poured it on the killing fields and thinking it blood, she drank it. She became full of gaiety and laughter, no longer having a taste for human blood. Mankind was saved. Ra renamed her Hathor. 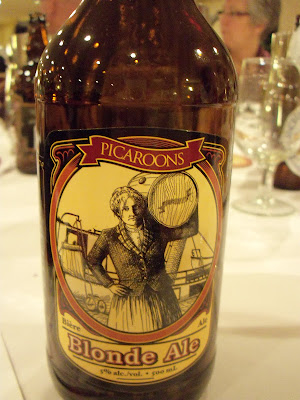 The Irish also have a feast day named after St. Brigit of Kildare, a nun who ran a monastery in the 6th century it was said could perform miracles. Since her nunnery brewed beer, St. Brigit was called upon by a village one Easter after it ran out of beer.
"She provided them with a barrel that was said to nourish 17 other parishes," said Amato.

Amato suggested the Irish feast day of February 1 as women's alternative to St. Patrick's day to celebrate their relationship with beer. 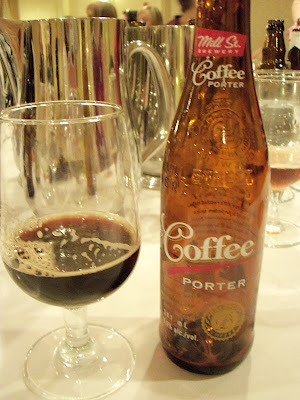 Coffee Porter is brewed by Mill St. Brewery out of Toronto by four women under 30. Located in the city's distillery district, they worked with a local coffee shop down the street to make this unique-tasting brew

It's only been since the Industrial Revolution that women have become disconnected from beer in the public mind, said Amato. It's commonly thought women strayed from beer because it's fattening. But that wasn't the case. 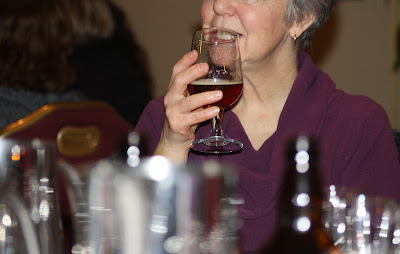 Celebrating International Women's Day, an attendee samples one of the eight beers on offer as part of Picaroons tasting for charity

With the onset of the Industrial Revolution, the family dynamic changed from an agricultural base working their farm, to a manufacturing economy providing employment in factories.

"Many of the men that worked in the factories were going to the pub after work to drink beer," Amato said. 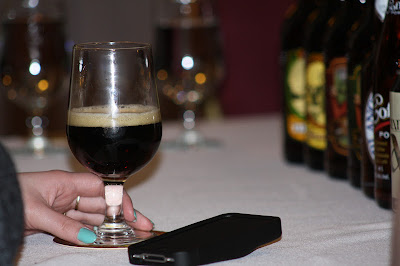 Women celebrated their relationship with beer last evening with a Picaroons tasting event marking International Women's Day
It's from this habit the stereotype of men bonding over beer at the pub arose. It wasn't known for women to do the same so advertisers catered to men. 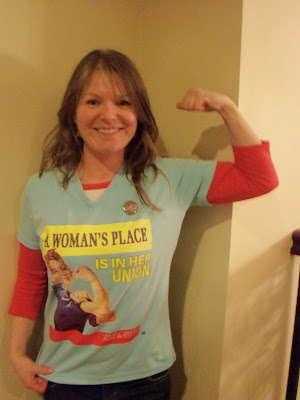 Attendee Leah Anstis sported a funky t-shirt while celebrating at the Picaroons beer tasting event honoring International Women's Day last night in Fredericton
In reality, the women of the early industrial era didn't go to the pubs because they didn't like the effect drinking after work was having on families. Out of this dislike came the Temperance Movement.

When the Temperance Movement succeeded in bringing in prohibition, women were further separated from beer.

As the evening wore on, the crowd loosened up as they tried the different ales.

After prohibition was abolished and people started drinking again, the effects of the Temperance Movement lingered, with advertisers once again catering to men due to left over feelings of women being anti-pub.

"However as time went on they [advertisers] started to include women, but the taste of beer for women proved to be unattractive. Women were found to gravitate to flavors," said Amato. 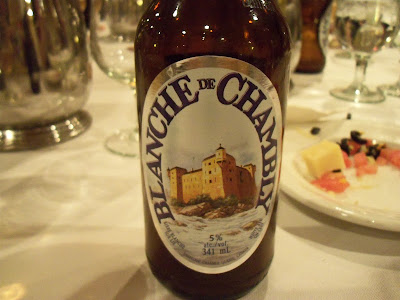 A favorite of the night not in the Picaroons stable was the Belgian-style wheat beer, Blanche de Chambly. It has notes of coriander and orange peel which appealed to several women in attendance

The craft beer movement, once called microbreweries, cottoned onto this knowledge in the 80s and has managed to cultivate a following of women customers with its range of styles and types of beer. Several women have become craft brewers themselves.
"At last count there were 23 female brewers in Canada," said Amato. 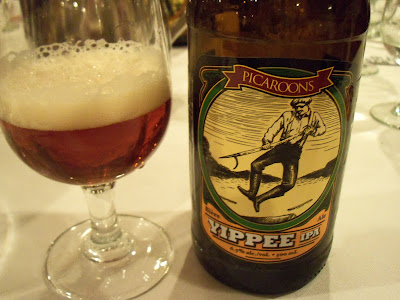 Picaroons Yippee IPA beer reflects the unique craft beer movement in that IPA beers are known for their solid citrus notes and bitter hops. Developed in the 70s, they spawned a "hophead movement" of people who liked the bitter hops

One of the original female brewers in Canada was Susannah Oland. She first made her brown October ale  in the back yard of her Nova Scotia home in 1867. Widowed during the 1870's with six children to look after, she renamed the small brewing business she had had with her husband to S. Oland and Sons. Brewing beer was one way a woman could support herself at that time if widowed. Oland went on to build the company into the biggest beer manufacturer in the Maritimes.

Oland was helped along, said Amato, because people at that time were afraid to drink water due to the plagues that swept Europe and North America. Instead people of all ages, including children, drank beer.

"It was lighter then, two to three per cent alcohol," said Amato, "but everyone drank it." 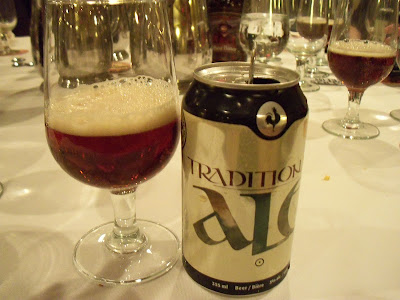 Big Rock Traditional Ale out of Calgary, was also sampled last night. Amato said it is a sweet, brown ale, similar to that first brewed by Susannah Oland

In the question and answer session at the end of her seminar, Amato answered a common question amateur beer drinkers often wonder: What is the difference between an ale and a lager?
"Ales are top fermented and lagers are bottom fermented," said Amato.

What does that mean?

She went on to explain in the production of an ale sugar is fermented by the yeast fungus, quickly consuming it and converting it to carbon dioxide in a fast and sloppy manner. The beer is pushed to the surface fast, hence being called top fermented. 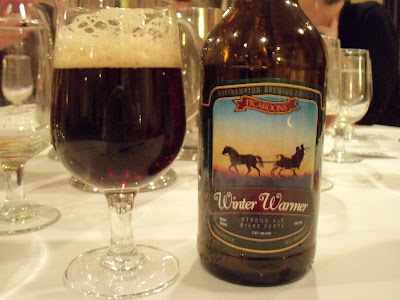 Only availaable in the winter, Picaroons Winter Warmer is a barley wine style ale. Amato described it as sweet and finishes dry; ideal to pair with dessert

A lager yeast, on the other hand, ferments slow and meticulously, taking longer to produce by a  month or two. The yeast is able to consume a wider array of sugars and emits spicy notes. Its absorption process creates a more crisp beer.  It is called bottom fermented because the beer goes to the bottom of the tank when it's done fermenting. 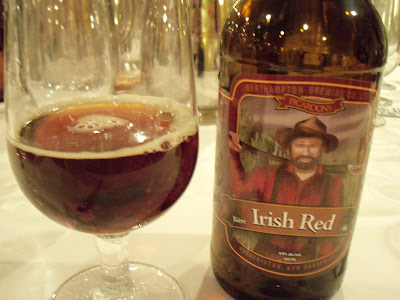 In a show of hands at the end of the evening, Picaroons Irish Red was the beer clearly loved by the ladies
at 7:36 pm