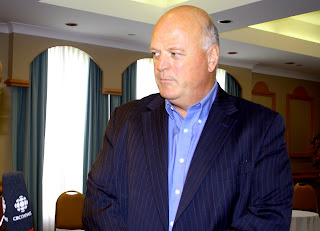 "This plan will see the Department of Natural Resources' conservation and resource staff equipped with mobile technology so they can spend more time patrolling our forests and waterways and less time in their offices,'' said Northrup. "A pilot project already completed with conservation staff found equipping their vehicles with mobile work stations resulted in an 18-per-cent increase in the time they spent in the field.''

Installing vehicle-based laptops allowed the participating staff to perform data entry and other work in the field that previously was done from an office. It also allowed them to better navigate through remote areas with the aid of GPS (global positioning system) and electronic maps, and it improved communication links between field staff and department offices.

Under the plan to increase operational efficiency, the department’s 240 conservation and resource staff will be equipped with mobile devices during the next two years. This move will enable the department to close 11 of its 28 offices during this period as staff carry out more of their duties from their vehicles while in the field.

"Mobile technology enables department staff to increase their presence in the forests and reduces the need for a number of district offices,'' said Northrup. "By implementing this strategy, staff will spend more time in the field, and taxpayers will realize significant savings at a time when it is vitally important that we all do our part to help address the province's budget deficit.''

Five of the offices will close during the 2012-13 fiscal year, which begins April 1:

The exact date and other information will be communicated to the public well in advance of an office closure. It is expected all five offices will be closed on or before Friday, June 29.

It is expected the Hampton and Welsford offices will be replaced by a single office to be located in the greater Saint John area. The regional offices in Bathurst, Edmundston and Miramichi will remain open.

The district office closures are designed so that there is about one hour's travel time from one department office to the next closest. The closures will affect the number of administrative support staff in the regions.

Northrup noted that a related initiative is underway to move to an electronic system of issuing hunting and fishing licences. This would reduce the need for the public to visit a department office to buy a licence. The target is to have the electronic licensing system in place is 2013.
at 12:21 am