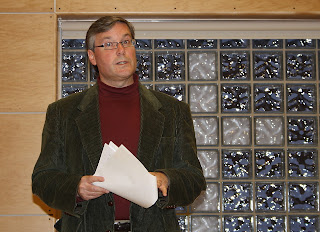 When former Environment Minister Margaret Ann Blaney was having public hearings on changes to provincial wetland policy in 2010-2011, Fredericton resident Mark D'Arcy spoke concerning the city's failure to protect residents and businesses from the severe rain events of climate change.

D'Arcy has tried to bring the City's attention to its wetlands to no avail. He is hoping for change in the May 14 municipal elections so officials will make shale gas and wetland protection priorities.


In the video below after the 1:00 mark, D'Arcy speaks during the environment hearings. He said this is the type of public presentation which has been repeatedly ignored or blocked by Mayor Brad Woodside and Fredericton City Council.

As a background primer on the video, D'Arcy explained that in mid-December 2010, less than an hour's drive away from Fredericton, a cloudburst hung over Magaguadavic Lake and dumped over 6 inches of rain.  The resulting surge of water in the Magaguadavic River resulted in the catastrophic flooding of Charlotte County.

"Public safety must be addressed by our elected officials. The next severe rain event could be over the city of Fredericton," said D'Arcy. He added, "On March 14, 2011, City Council took a brief, breathtaking 2-minute final vote to approve another 70's style sprawl development in the UNB Woodlot.  Not one city councillor made any public comment on the need for a Flood Risk Analysis on future development plans for the UNB Woodlot."

Who benefits from not protecting upstream wetlands and urban wetlands, asked D'Arcy.

At present, the intact UNB Woodlot helps to protect southside Fredericton from severe rain events.  He said the City can't afford to develop these lands. The expensive stormwater pipes and retention ponds being paid for by taxpayers, will NEVER be able to handle the 800,000,000+ million gallons of water that will fall on the UNB Woodlot during a 8-inch severe rainstorm.

D'Arcy pointed out the forested wetlands of the UNB Woodlot would absorb and slowly release this volume. What nature is doing for free should be costed out and part of any discussion on how much money UNB can make from these lands.

He said The Friends of the UNB Woodlot continue to ask for a flood risk study to be conducted for the UNB Woodlot. The group wants to know what is the impact of development of 50% of the UNB Woodlot, and the fragmentation of all 3800 acres of these forested wetlands? Where will the rain water go in a 6-inch, 8-inch, 10-inch severe rain event?