Hayes campaign launch for Mayor has 'em dancing in the aisles 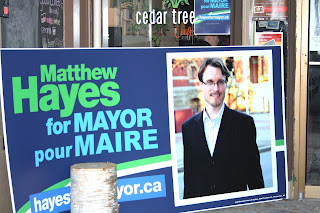 FREDERICTON - It's official. Matthew Hayes is a candidate for the job as Mayor of Fredericton. He kicked things off to a packed house of close to 250 people last night at the Cedar Tree Cafe in the city's downtown core.

Accompanied by the Alex Bailey Swing Band, who's music had some supporters literally dancing in the aisles, the evening crackled with an exciting energy, giving the feel of a new era being ushered in by Hayes for the city and it's people.

After about an hour of enjoying the music, the crowd settled down as Hayes approached the mic to give his speech.
He began by thanking his supporters and praising the city, going on to give his reasons for the necessity of change at the helm of the city's administration, in a perilous time that requires innovative thinking to prepare for the future.
Expanding on his campaign theme of Great Ideas for a Great City, Hayes outlines what cities for the future should be about, taking advantage of the opportunities with coming changes.
Hayes wound up by talking of how the old style of politics must come to an end for voters to become re-engaged in the political process after years of cronyism ignoring the wishes of the populace.
Getting his speech out of the way, a relieved Hayes circulated among the throng of well-wishers, shaking hands and basking in the glow of a successful launch party.