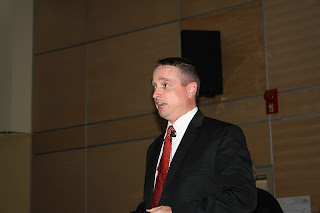 Giving a lecture today at UNB's MacGlaggan Hall, former Dish, Texas mayor Calvin Tillman discussed how chemicals from hydraulic fracturing can become run off, effecting the water supply of valleys in the path of the chemicals.

Tillman was asked a question on this subject by a Fredericton native concerned about shale gas fracking chemicals seeping into the UNB woodlot area. The city is under license for exploration by shale gas companies, with the woodlot a potential site for fracking. The chemicals used in the fracking process, if the woodlot is played, could become run-off, seeping into the city's acquifer's downhill from the woodlot.
Tillman, best known for his interview with Josh Fox in the documentary Gasland, was in Fredericton as part of a province-wide tour about his experiences with the shale gas industry while mayor of Dish.
at 9:33 pm