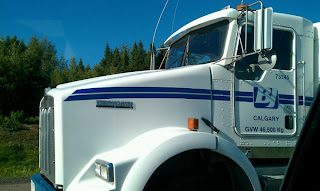 Photo: Stephanie Merrill, Conservation Council of New Brunswick
Shale gas "fracking" trucks were sighted in the Jemseg and Fredericton area just before the weekend. On Thursday, September 8, 2011, a convoy of large trucks were observed on the Trans-Canada Highway around Jemseg at 4:30 pm and they were headed towards Fredericton.

Stephanie Merrill, Freshwater Program Coordinator, Conservation Council of New Brunswick) drove by these vehicles and noted some had tanks carrying liquid nitrogen (a common fracking fluid), while others had unidentified infrastructure gear.

On late Friday morning, September 9, 2011, the trucks were seen traveling west along Knowledge Park Drive in the UNB Woodlot and turned left onto Regent Street toward New Maryland.
at 9:48 pm