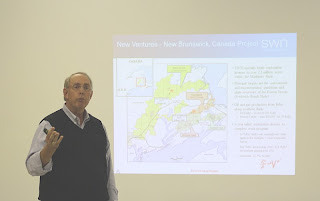 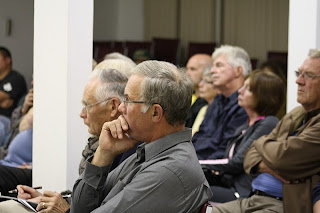 Members of the public listened intently last night to the presentation on shale gas given by SWN's Tom Alexander at the Cambridge Narrows Municipal Building. (Photo: Cheryl Norrad) 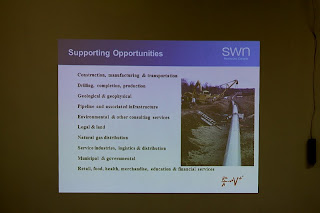 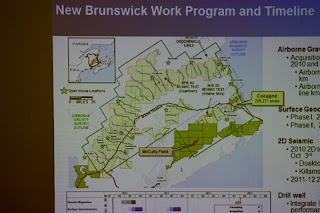 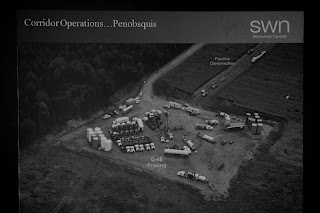 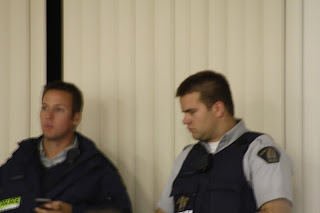 Almost a half-dozen RCMP officers were on hand during the SWN open house last evening in Cambridge Narrows. Although a few protesters were at the presentation, it was a peaceful demonstration. (Photo: Cheryl Norrad) 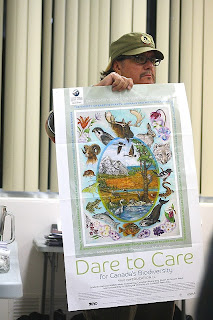 Protester Ron Tremblay quietly held up the above sign in protest against shale gas at the SWN information session on the industry last night in Cambridge Narrows. (Photo: Cheryl Norrad) 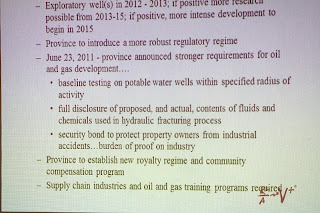 Above is the timeline for SWN's shale gas commitment to bringing the industry about in New Brunswick, part of the presentation on shale gas last evening in Cambridge Narrows. (Photo: Cheryl Norrad)
Below is a message from a reader that was too big to fit into our comments section:
"Problem...he said it has never been proven that fracing caused contamination of acquifers...LIES!...and also Tom did you inform ppl that these NEW regulations put forward June 23, 2011 are not needed to be complied with because as they are not part of the contracts that were signed?...can you say, "Misinformation?""
PA Report: Fracking Contaminated Drinking Water
Related articles:
Charleston Gazette: Report ties ‘fracking’ to W.Va. well contamination
NYT: Tainted Well Challenges Claim of Fracking's Safety
August 3rd, 2011,Washington, D.C.– Contrary to the drilling industry claim that hydraulic fracturing has never contaminated groundwater, the Environmental Protection Agency concluded in a 1987 study that “fracking” of a natural gas well in West Virginia contaminated an underground drinking water source. That all-but-forgotten report to Congress, uncovered by Environmental Working Group and Earthjustice, found that fracturing gel from a shale gas well more than 4,000 feet deep had contaminated well water.
EPA investigators concluded that the contamination was “illustrative” of a broader problem of pollution associated with hydraulic fracturing but said the agency’s investigation was hampered by confidentiality agreements between industry and affected landowners. Environmental Working Group’s year-long investigation of the incident found that several abandoned natural gas wells located near the fractured well in West Virginia could have served as conduits that allowed the gel, a common ingredient in fracking fluid, to migrate into the water well.
“When you add up the gel in the water, the presence of abandoned wells and the documented ability of drilling fluids to migrate through these wells into underground water supplies, there is a lot of evidence that EPA got it right and that this was indeed a case of hydraulic fracturing contamination of groundwater,” said Dusty Horwitt, EWG’s senior oil and gas analyst and author of “Cracks in the Façade,” EWG’s report about EPA’s finding. “Now it’s up to EPA to pick up where it left off 25 years ago and determine the true risks of fracking so that our drinking water can be protected.”
Since the 1987 report, the industry has hydraulically fractured hundreds of thousands of wells and is continuing a historic push into natural gas-bearing shale formations, once considered inaccessible, that lie beneath populated areas in a number of states, including West Virginia, New York, Pennsylvania, Ohio, Michigan, Louisiana and Arkansas.
To access these formations, drillers often use a relatively new combination of horizontal drilling and higher-volume fracturing. As drilling activity has intensified, reports of pollution have sparked a growing national debate over the actual or potential environmental risks, including contamination of groundwater, the source of drinking water for more than 100 million Americans, according to the U.S. Geological Survey.
Congress exempted hydraulic fracturing from the Safe Drinking Water Act in 2005 following an EPA study of hydraulic fracturing the previous year which found little risk to water supplies when fracturing is conducted in coal bed methane deposits. Neither Congress nor the EPA mentioned the agency’s 1987 finding. EPA is currently conducting a new study of fracking’s impact on water supplies.
“During the fracturing process,” EPA investigators wrote in the 1987 report, which focused on the handling of natural gas, oil and geothermal wastes generally, “fractures can be produced, allowing migration of native brine, fracturing fluid and hydrocarbons from the oil or gas well to a nearby water well. When this happens, the water well can be permanently damaged and a new well must be drilled or an alternative source of drinking water found.”
Environmental Working Group found that the evidence in the West Virginia case was consistent with pollution from hydraulic fracturing, though it is possible that another stage of the drilling process caused the problem.
In the EPA’s files in Washington, EWG also discovered a document submitted in 1987 by the American Petroleum Institute, the natural gas and oil industry’s major trade association, that appeared to agree with the EPA finding but suggested that it was not typical. “One case,” the API wrote, referring to the West Virginia contamination case, “resulted in a workover operation fracturing into groundwater as a result of equipment failure or accident. As described in the detail write-up, this is not a normal result of fracturing as it ruins the productive capability of the wells.”
*************
EWG is a nonprofit research organization based in Washington, DC that uses the power of information to protect human health and the environment. http://www.ewg.org/
at 6:48 pm