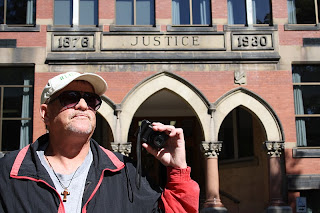 Fredericton blogger Charles LeBlanc was back in court today to plead on a charge of allegedly breaking city by-law T-4, Section 16, or driving a bicycle on a city sidewalk. LeBlanc pleaded not guilty after the charge was read to him by provincial court judge Julian Dickson, while Crown Prosecutor George Kalinowski looked on.
LeBlanc stood in for himself at today's proceedings, but became confused by procedure when he learned the information against him was processed in the name of the City Summons Clerk, not the complainant. LeBlanc asked Judge Dickson to explain the role of the Clerk, whether the city police involved in the complaint would be present and who the witnesses are in the case. Dickson responded that wouldn't be known until the trial which was set for February 29, 2012 at 1:30 pm in court room one.
LeBlanc also requested a prosecutor from outside the Fredericton area, citing possible conflict of interest issues due to the fact his reputation as a notorious blogger might influence local prosecutors.
After deciding on a court date, Judge Dickson asked LeBlanc if he had anymore questions. LeBlanc stated he was afraid since the current charge came about by a third-party complaint made against him, without police observing the by-law infraction directly. He is worried about possible future accusations for himself and for others who are the victim of third-party complaints.

LeBlanc again asked the judge who the witnesses against him were in the case. At that point Kalinowski interjected, saying the city will provide LeBlanc with the disclosure papers before trial, making him aware of the parties involved.
Today's court appearance comes on the heels of another last month of disturbing the peace. LeBlanc was cited for breaking a city noise by-law after residents and workers complained about him shouting through a bullhorn downtown in front of the Fredericton City Police headquarters. LeBlanc was protesting against the police for what he saw as discrimination when he was cited for riding his bike on the sidewalk, since it's often done by many in the public whom the police ignore. LeBlanc has said in the past police know he is on social assistance and can't afford to pay the fines, making him conclude he was discriminated against for being poor.

At issue for LeBlanc is police didn't directly witness the alleged by-law infraction. A complaint was laid by a third party, who, LeBlanc later learned from an anonymous source, was Legislature Sergeant-at-Arms Dan Bussieres. The two have had a longstanding feud after LeBlanc was banned from reporting at the Legislature by Bussieres some years ago. LeBlanc believes police are colluding with Bussieres  to silence him since he is a strong advocate for social justice in the city, sometimes being aggressive in his tactics with local officials and provincial government employees. He is worried that a dangerous precedent could be set where third-party complaints can subject anyone in the public to charges.

LeBlanc plans to follow up with the city for disclosure documents in a few weeks.
at 11:04 pm