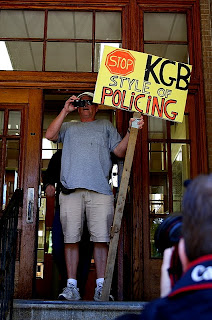 Blogger Charles LeBlanc emerges from the Fredericton court house after being arrested and jailed on Wednesday. (Photo: Cheryl Norrad)


Blogger Charles LeBlanc was in court in Fredericton this morning for a plea on the charge of disturbing the peace after his arrest by Fredericton City Police on Wednesday, and subsequent 48 hours in jail at the Saint John Regional Correctional Center. In response to Judge Denis Lordon, LeBlanc pleaded not guilty to a charge under section 175 of the Criminal Code of causing a disturbance and released on an undertaking promising to keep the peace and be of good behaviour, appear in court on the charge when next required and to refrain from using any voice enhancing device causing excessive noise in the Fredericton area. LeBlanc will return to court on October 28 at 1:30 pm for trial.
At the time of his arrest, LeBlanc had already been protesting for a few weeks on what he perceived as unfair treatment by Fredericton City Police. He used a bullhorn on the sidewalk in front of the station to loudly profess his frustration at being issued fines for minor by-law infractions when others breaking the same laws had not been. LeBlanc felt a victim of discrimination by police and the target of public officials with whom he's had ongoing disputes the past few years.
Looking tired and disheveled, LeBlanc told media assembled after his release that he'd had no sleep since being jailed and was denied medication by medical staff in the Saint John facility. He said he signed the papers agreeing to the undertaking in order to leave jail because without his medication over a long period, he said, "I would be dead."
Leaving the grounds of the Justice Building, LeBlanc was accompanied by supporters and given best wishes from bystanders. He was off to enjoy his first real meal since the meager offerings of jail. 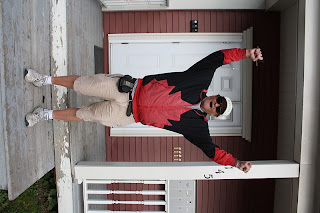 Blogger Charles LeBlanc home Friday after 48 hours in jail on the charge of disturbing the peace. (Photo: Cheryl Norrad)