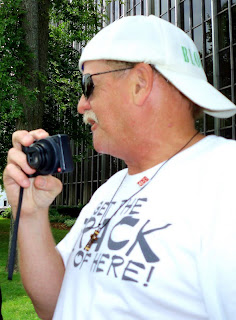 We have just received word that blogger Charles LeBlanc is in jail. Details are sketchy at this time and we're trying to follow up. Below is the message we found in our in-box tonight from a family member of Charles':

"I received a call from Charles and he was at the Black River jail.  He went to court today and they wanted him to sign something stating that he would not go on Westmorland Street and he told them that he lived on that street so the judge sent him to jail until Friday morning when he will decide what to do with Charles. He wanted to make sure I contacted you and that the media are aware. He also said that they have refused to give him his medication."

UPDATE:  Fredericton courthouse confirmed LeBlanc indeed in jail due to being arrested and charged by Fredericton City Police yesterday on one count of disturbing the peace. Charles is currently in the Saint John Correctional Center on Black River Road awaiting court appearance in Fredericton on Friday, September 16, 9:30 am.


LeBlanc had been protesting with a loud bullhorn in front of FPD headquarters for several days to the annoyance of local residents, workers and business owners. He received a warning some days ago, got a ticket earlier this week, and has now been arrested. LeBlanc said he was protesting due to feeling discriminated against by the Fredericton City Police for being poor because he cannot afford fines issued for minor by-law infractions. Others had broken the same by-law but hadn't been ticketed. LeBlanc felt that unfair and led him to believe he was targeted for ticketing as a way for those in authority with whom he has an on-going dispute to get back at him. LeBlanc said his protest would hopefully get him arrested so he could have his day in court on the issue.


Leblanc received a ticketed fine for riding on the sidewalk with his bicycle, a contravention of city by-law. Since many other cyclists in the city do it, LeBlanc felt singled out. LeBlanc said he was given information from an unnamed source that the complaint arose from Dan Bussieres, Sgt.-at-Arms in the provincial Legislature, someone LeBlanc has had a long-running dispute with after being banned from Legislature grounds by Bussieres some years ago. LeBlanc claims he was targeted by Bussieres, who laid the complaint through a friend on the City Police force, Cpl Fred L'Oiseau. According to video footage on LeBlanc's blog, the Cpl gave LeBlanc the ticket some months ago on a downtown street without seeing LeBlanc in the act of breaking the by-law, but issued the ticket based on the complaint to the city.


LeBlanc also received a no-helmet ticket from city bike patrol earlier in the summer for sporting no helmet while bicycling on the train bridge downtown. LeBlanc said then he felt discriminated against because many others were riding that bridge that night with no helmet, but weren't ticketed.


Leblanc also used old video footage from his website showing government officials breaking by-laws such as jaywalking. Laying a complaint with the Fredericton City Police on the issue, he expected the persons breaking the by-law to get a fine as he did. However, nothing came of the complaint, leading LeBlanc to believe he was being discriminated against as a poor person and having been troublesome to local authorities. So he took to the street in front of the police station, saying he was using his free speech rights to loudly protest the matter.