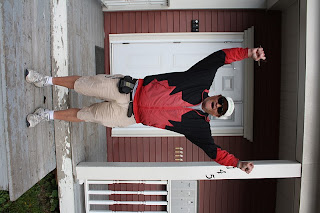 Local blogger Charles LeBlanc will be in court today at 1:30 pm over the ticket he received some months ago for breaking a Fredericton city by-law by riding his bike on the sidewalk.

LeBlanc is also dealing with another related matter that had him in court last month after breaking another city by-law by disturbing the peace in front of the Fredericton Police station. LeBlanc was protesting the bike ticket, and an earlier one for riding his bike without a helmet, using a bullhorn that roused the annoyance of locals who complained to police. The disturbing the peace charge landed him in jail for 48 hours after refusing to sign an undertaking. LeBlanc claimed he wanted his day in court over the matter by not signing the papers. He said he wanted to make the unfairness of the issue public, since others ride a bike on the sidewalk without being cited by police.

LeBlanc felt singled out on the minor infraction of riding his bike on the sidewalk, saying police are aware he is on social assistance and couldn't afford the fines, leading him to believe police were discriminating against the poor. LeBlanc also believes he was targeted by city police on the request of Legislature Sergeant-at-Arms Dan Bussieres, someone Leblanc has had a long-running feud with after being evicted from the building by Bussieres. After finding out from an anonymous source it was indeed Bussieres who laid the complaint and police acted on his word, LeBlanc was emboldened to point out the seeming discrimination and expose the collusion between police and Bussieres by going to court.

LeBlanc's next court appearance is slated for October 28 in answer to the disturbing of the peace charge.
at 11:06 pm