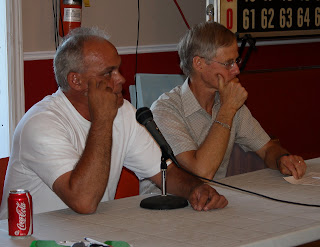 "Keep it civil, don't contemplate anything illegal...stop crews in a non-confrontational manner," meeting chair Eric Hadley advised at the beginning of the discussion.

Helping Hadley conduct the meeting, PASGO member Joe Stafford informed the crowd the organization is forming a network of community watch groups, asking them to sign a contact list at the back of the room for those who wanted to participate.

"We need to get groups together to intercept trucks, get in their way and slow them down," said Stafford.

After discussing a few more measures such as a letter-writing campaign to the local MLA and getting information pamphlets out to the public, Stafford turned the floor over to a member of the Maliseet Grand Council, also on hand to discuss strategy in dealing with shale gas exploration companies. 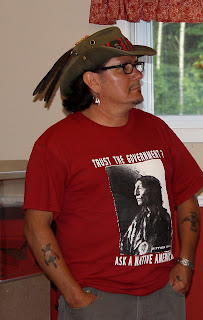 Maliseet Grand Council member Ron Tremblay participated in the PASGO strategy meeting Wednesday evening in Penniac. (Photo: Cheryl Norrad)
"Be more aggressive about telling crews to leave the area because you people live here, it's your territory," said Ron Tremblay to murmurs of agreement in the crowd. "Don't let the trucks through."


Outlining the tactics of First Nations, Tremblay said there are three levels of reason with opponents on an issue.
"We reason with them once, even twice, but by the third time there is no reason...the big guys take over,"  he said.
Tremblay, attending the meeting at the behest of clan elder Alma Brooks, pledged the Council's support to the Penniac people, whereupon the anxious crowd erupted into applause.

As locals talked amongst themselves after the meeting closed, business owner and former provincial NDP candidate, Sharon Levesque, said it was time to get things going.

"People have to get together and stop the government from rolling over," she said.

Levesque also went on to question the job local MLA Kirk MacDonald is doing on this issue, having had no reply from him to her letters about the shale gas industry in New Brunswick.

"He has to stand up for the people who voted him in; he's going to lose his seat if he doesn't stand up," she said.

Anna Saindon also attended the meeting, one of the rare under 30 faces in the crowd, who pointed out a sad irony for many in the room.