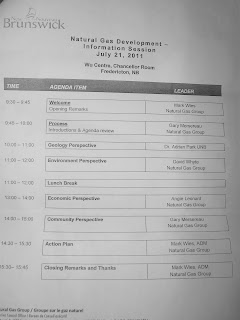 The Purple Violet Press has received a copy of the agenda from the recent shale gas information session arranged by government for mayors and councillors from around the province on July 21. The meeting was to be held in Fredericton at UNB's Wu Conferene Centre, but was cancelled due to a lack of attendance numbers by municipal officials.

According to the agenda, the majority of information to be presented to the officials was by Natural Resources from members of the Natural Gas Group, a committee overseeing the industry in New Brunswick. These members and their duties at the meeting included: Mark Wies - Opening Remarks, Action Plan, Closing Remarks, Gary Mersereau - Meeting Planner, Agenda Process and Community Perspective, David Whyte - Environmental Perspective, Angie Leonard - Economic Perspective.

The lone non-committee member was Dr. Adrian Park of UNB, who was to present the Geology perspective. Park was also a part of the government's shale gas forum in Fredericton on June 23.

None of the shale gas companies currently working in the province were listed on the agenda to give a presentation, nor were any environmental or community groups.

DNR spokesperson Anne Bullmonteith has said there has been no decision on whether the meeting will be rescheduled at a later date.

The Natural Gas Group has been contacted for its perspective by The Purple Violet Press, but as yet, there has been no response. Mayor Brad Woodside was also contacted via Twitter, but also has yet to respond. We will publish their responses as soon as they are received.

UPDATE: The following is Mayor Woodside's response to our inquiry of whether he was scheduled to attend the July 21 meeting:  "No...my schedule from morning to night was full."
at 11:57 am