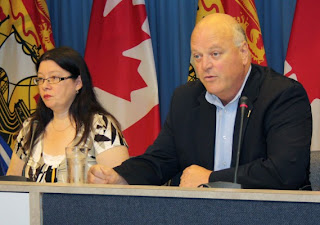 
Media around the province are reporting today that a leader of an anti-shale gas fracking community group has changed position and is no longer calling for a moratorium on the industry in New Brunswick.

Bethany Thorne-Dykstra, head of Citizens for Responsible Resource Development, shocked anti-fracking groups around the province yesterday in a press conference with Natural Resources Minister Bruce Northrup, by coming out in support of government regulations recently put in place to tighten up oversight on the industry.

"We are willing to meet the government half-way by dropping our request for a moratorium," said Thorne-Dykstra.

In dropping the call for a moratorium, Thorne-Dykstra's group now expects to be part of the steering committee overseeing the development of the shale gas industry in New Brunswick.

Although Thorne-Dykstra claims the group has 650 members,  it's Facebook page shows only nine members so far.

Followers of the anti-shale gas Facebook site, Ban Hydraulic Fracturing In New Brunswick, Canada, registered their dismay with Thorne-Dykstra.They were baffled as to why Thorne-Dykstra did an about face on the issue. Sal Cunliffe asked on the same site, "why, why, why Bethany?"

A member of Hampton Water First, Carl Wolpin, said Thorne-Dykstra doesn't represent other anti-shale gas community groups around the province, and he wasn't aware of her group until yesterday. Wolpin questions Thorne-Dykstra's support from members of Citizens for Responsible Resource Development, wondering if she spoke to them or just made the decision unilaterally.

In a conferene call Wednesday evening, Wolpin and the other groups resolved to continue to ask the government for a moratorium on the industry in the province.

Post script:  Several members of Thorne-Dykstra's group, Citizens for Responsible Resource Development, are formally disengaging their membership through notification of her and Natural Resources Minister Bruce Northrup. The former members hope by doing so, Thorne-Dykstra will lose her credibility and be removed from DNR's steering committee on the shale gas industry.
at 3:19 pm