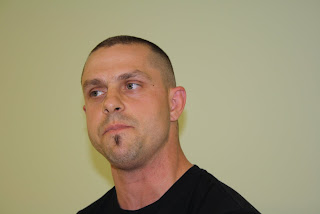 Young and idealistic, Maxime Daigle entered the military shortly after graduating high school in his small hometown of Pointe Sapin. He had a desire to serve the cause and sacrifice his life if necessary. But not long after donning the uniform, it proved to be a disappointment for him and he got out.

"I didn't like the programming so I was only in for a short time," he said.


With his life's purpose seemingly lost and looking for work, he put his grand ideals away, going for the lure of big money to be made by the sweat of his brow in the gas fields out west. At that time he didn't care about politicians, the environment or the people's right to know. It was "drill, baby, drill" and that's what he did for almost 7 years in the shale gas industry, from Alberta to Texas and a few other places in between, working for gas drilling companies like Encana, Shell and Canadian National Resources.


"You take a bunch of young kids making big money, we didn't care," he said.


Daigle had a front row seat to the hydro-fracking show, pulling his weight on a team that installed the piping for a drill bore going deep into the ground, blasting fluids into the shale crust to release natural gas trapped inside. Never mind that sometimes things went sideways and wrecked the water wells of nearby private property owners, or a poorly capped well left behind damaged the environment.The name of the game for the industry was move fast for maximum profit: find 'em, drill 'em, frack 'em and forget 'em.


But deep down something didn't feel right about it all to Daigle. After educating himself about the effects of what he was doing on people and the environment, the idealist in him came roaring back to life.


"I became angry at the companies and government for not informing people what the industry was doing to the planet," he said.


But what could he do? It was hard to quit the good money. He had a mortgage, a car and all the toys a young man wanted. He had to plan his escape, taking a while to divest himself of his material lifestyle.


After leaving the industry, Daigle was at a loss. His ideals were pushing him to do something, but he wasn't sure where to focus his energies.


Gradually he realized returning to school was the best option. After all, he had the money, having worked in the industry all those years; may as well put it to good use.


This month, Daigle finished up the alternate energy systems program at NBCC Moncton. He's now in the position to fight for a new cause.


"I did it for the credibility; to live by example and to gain a knowledge of how the energy sector works. I want to help people make the transition to sustainable energy," he said.


Along with his new vocation, Daigle volunteers his time augmenting the Conservation Council of New Brunswick's information sessions on the shale gas industry here, speaking to communities around the province  when asked.


"I was tired of government and corporations working against democracy. People needed to be informed," he said.


But with any fight comes sacrifices, like driving long hours to and from little rural towns around the province affected by this industry. More sinister, however, are the threats he's received. With billions of dollars at stake, Daigle has placed himself in a dangerous position by speaking out against the industry, following in the footsteps of those such as Karen Silkwood, who mysteriously died in a car accident while fighting the nuclear industry in seventies USA, and Ken Saro-Wiwa, killed for his stand against Royal Dutch Shell drilling for oil in Nigeria.


"I've been followed, watched by people from industry and government in the crowd [at speaking engagements] and some other things have happened out of the ordinary that I can't talk about," he said.


But like that idealistic young man who signed up to give his life in war, Daigle is ready to do the same thing in his fight for the environment.