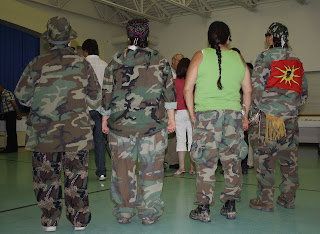 First Nations members confronted SWN General Manager Tom Alexander at a company open house yesterday in Durham Bridge, telling him SWN wasn't wanted in the building or the province and that it should leave. (Photo: Cheryl Norrad)
In what began yesterday as a pleasant information session at the Nashwaak Valley School in Durham Bridge by shale gas company SWN, soon turned ugly as First Nations members stormed the building to shut it down, sending executives packing.

"How many times do we have to tell you no means no!" bellowed a female Native, who preferred to remain anonymous, as she walked toward SWN General Manager Tom Alexander standing at a whiteboard presenting facts and figures to locals in the school's gymnasium.

Chatter in the room came to an abrupt halt as everyone there for the open house turned to see Alexander being surrounded by several Natives dressed in camouflage uniforms and feathers.

The female Native got in Alexander's face, pointing her finger at him, demanding SWN stop the presentation, leave the building and the province.

However, Alexander stood his ground at first and refused to be moved.

"We will leave when we are ready," said Alexander.

At that, the Natives ratcheted up the pressure with burly Tobique protection officer Stephen Perley stepping in to make it clear to Alexander it was time to go. 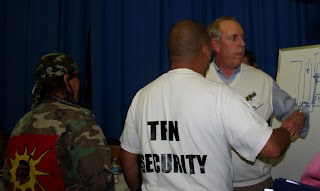 
"You're going to leave. LEAVE!" Perley said in a deep booming voice that echoed throughout the gym, while looking at Alexander with a death stare.

PR executive Louis Legere moved in to get Alexander out of the fray before anything physical took place, hustling him to a back room off the gym where bodyguards immediately took up positions in front of the door. 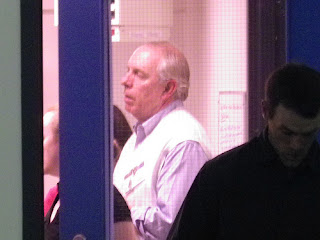 SWN General Manager Tom Alexander was removed to a back room to prevent a confrontation with Natives from escalating yesterday at the company's open house in Durham Bridge. (Photo: Charles Leblanc)
Having safely deposited Alexander in the room, Legere began walking out of the gym, but was followed by Perley and the camouflaged group. 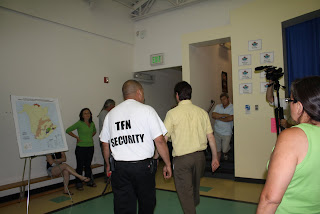 PR executive Louis Legere is hounded out of yesterdays SWN open house in Durham Bridge by angry Natives who want SWN to leave the province. (Photo: Cheryl Norrad)
"How much did they buy you for Louis?" yelled Perley at the back of Legere's head. Clearly shaken, Legere kept on walking and left.

The Natives turned and headed toward the room where Alexander was holed up, but were headed off by RCMP Sergeant J. Stenger before they could get inside. Stenger proceeded to negotiate with the unidentified Native woman and Perley. 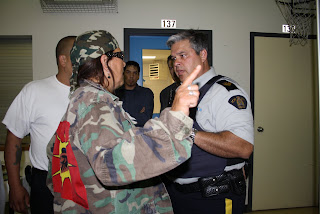 An unidentified First Nations woman speaks with RCMP Sergeant J. Stenger yesterday at the SWN open forum held in Durham Bridge. The Natives wanted SWN out of the building and out of the province. (Photo: Cheryl Norrad)
"We don't want him here," the Native woman said to Stenger, who replied the company could be there because it was an open and public forum.

So it was taken to the people. The female Native turned from Stenger and asked the crowd for their thoughts on whether the executives should stay or go. 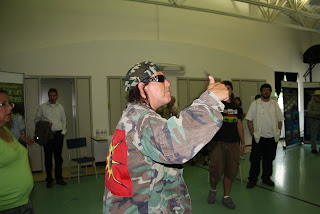 An unidentified Native protester asks people in the room if SWN is wanted in their area yesterday at the company's open house in Durham Bridge. (Photo: Cheryl Norrad0
"Do the people of Nashwaak Valley want these people here?" she shouted.

With a few more minutes of huddled discussion with Stenger, the Natives gradually left the gymnasium without incident, filing out past two other RCMP officers on hand to give Stenger backup. They continued their protest outside with others.

Shortly afterwards, Alexander returned to the gymnasium. He continued to talk to the public alongside other executives about SWN's shale gas exploration in the province, seeming no worse for wear. 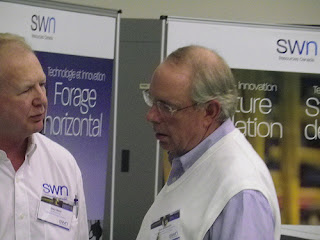 SWN General Manager Tom Alexander, right, remained unruffled after confrontation with Natives yesterday at the company's open house information session in Durham Bridge. (Photo: Charles Leblanc)
However, instead of continuing on with the open house until 8 p.m. as scheduled, it was closed down, with company members leaving in a convoy around 6 p.m. to shouts of delight from protesters.

SWN executives leave their open house before scheduled yesterday in Durham Bridge, forced out by a confrontation with Natives who cheer the leaving convoy above with other protesters. (Photo: Cheryl Norrad)
at 10:33 am