Sightings of half-ton trucks with geological logos have citizens in St. Ignace nervous, said Dallas McQuarrie, a resident of the area and spokesperson for the non-profit anti-fracking group Ban Fracking NB.

Geological companies have been hired by shale gas businesses in the province to provide seismic testing data to determine where potential deposits might be tapped for fracking. One of the ways that data can be obtained is by large thumper trucks with a plate on their undercarriage which slams into the ground to loosen the natural gas and is recorded by a geophone on the surface. 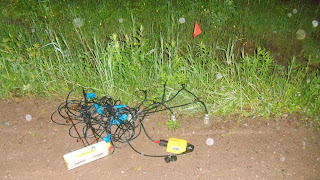 Above is an example of a geophone device used to record shale gas activity underground. (Photo: Ban Fracking NB) 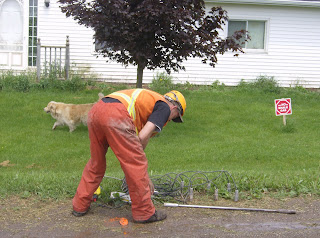 Geological companies use geophone devices like the one above to capture seismic activity of natural gas underground. (Photo: Ban Fracking NB) 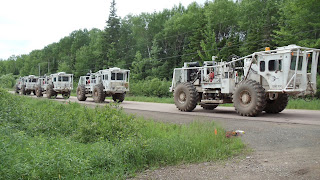 Thumper trucks usually travel in a convoy, stopping to thump the ground with plantforms on their undercarrige to loosen natural gas underneath. It's movement is picked up by geophone devices on the surface. (Photo: Ban Fracking NB)


The Purple Violet Press caught up with McQuarrie on the weekend to learn the arguments of Ban Fracking NB against the shale gas industry making a home in New Brunswick.
PVP: What about those who say the economy of New Brunswick needs this industry for income to provide services to the public in the future?

McQuarrie: The returns on shale gas are not enough to offset the environmental devastation it will do to this province. Our future is in renewable resources and other areas such as tourism. The royalties paid to the province only kick in after everyone else is paid and 10% is too low; it's not enough. If we ruin our water for such low royalties, it's lunatic...the spinoffs to the local economy aren't worth it; it's not worth the fast return on a short-sighted investment. Without a vision, the people perish. The government needs to quit looking for the quick fix.

PVP: According to shale gas company Southwestern Energy (SWN), the general reception they've received around the province is positive. Have you heard that?

McQuarrie:  I haven't heard anyone say it. Usually it's the people saying nice things about something like this who are the ones getting money out of it. If you read any of the studies done on this by the United States National Academy of Science or the British Scientific Council, the science is saying it's horrific. But to the people making money, it's good. When people look into it they aren't in favor of it. The New Brunswick government has been sold a bill of goods and isn't buying the science on the devastation.

PVP: What is the purpose of the lobby group (Ban Fracking NB)?

McQuarrie:  It's to make people aware that the industry is coming to the area. They're realizing it now that the they're [geological companies] here and banding together to protect the land.

PVP: What are/will be the tactics for keeping these companies out?

McQuarrie:  It depends on what people want to do. Some have talked of laying down on the road in front of the thumper trucks when they come.

PVP:  Has anyone in the area been notified seismic testing is taking place?

McQuarrie: [Companies] approached people individually door-to-door offering a free water test; they're not coming out and saying they're a shale gas company. Most people have told them to get off their land, but one couple who allowed it are now afraid after hearing everything. People recognized strangers who are conspicuous off the beaten path; locals on ATV's in the woods have been noticing things.

PVP: What about the argument the shale gas companies are only doing seismic testing now; there's no fracking going on?

McQuarrie: If they find gas, they'll want to frack; there's only one reason they're here and that's to make a profit.

PVP:  SWN representative Tom Alexander said in a presentation in Boiestown that it has little or no contaminated water in it's operations. What do you think of that claim?


McQuarrie: That's an insult to our intelligence and all that means is the poisons have separated from the water and gone someplace else they can't account for. He can say it's not dangerous, but would he drink the water?

PVP: Along with helping the economy, there is the promise of jobs and investment in education by shale gas companies. Isn't that a good thing?


McQuarrie: That's not the point. The point is when the water is gone, then what will they do? People will be trained to work in an industry no longer here. What will they do then?

PVP: There was some discussion by Alexander at the Boiestown meeting of the government putting backend remediation legislation in place that doesn't let companies off the hook for cleanup if they leave. Isn't that an example of the government covering its bases?


McQuarrie: No amount of money can replace a natural resource like water. They can't clean up a site if they can't find all the chemical contaminates. It's the same old story, a company promises up front to do cleanup then reneges. They're smelling the last buck before the technology is shut down; they're making a fast buck off hicktown rubes.

PVP: What does Ban Fracking NB want to accomplish?


McQuarrie: We want wide open public hearings where the scientific evidence can be laid out. We're not against shale gas exploration, it's the fracking; it's a Frankenstein technology. If the government banned fracking, it [the protest] would be all over. There would be no loss of face for the government because the agreement came in under the Liberals. We are hopeful the government will hold open meetings. If they do, they'll get credit for it. The fundamental question is, is the government going to gamble with the environment or be cautious?

This interview has been condensed and edited.
at 7:53 pm