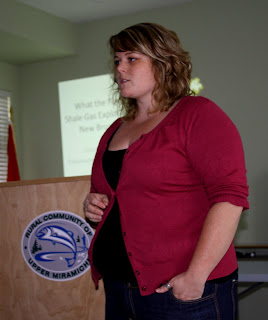 Stephanie Merrill of provincial environment watchdog the Conservation Council of New Brunswick (CCNB) gave a public presentation in Boiestown on Monday, outlining the group's concerns about the effects of the shale gas process on habitat and watersheds.

A common misconception Merrill regularly runs into at her public presentations is that it's only the drilling, often called fracking, that affects the environment. But it's actually the entire process, ranging from exploratory seismic testing involving explosives, to unstable infrastructure and the fracking method itself, that creates a whole host of problems in the natural habitat.

"There are multiple phases to the process that effects the environment," she said.

Small test wells called 'shotholes' are initially drilled thirty to fifty meters deep into the ground and dynamite is set off down the hole to create seismic waves. These waves are collected with a geophone device that can pick them up, indicating shale gas is present for drilling. Thumper trucks can also be used in the seismic testing phase. These large trucks have a platform on their underbelly that repeatedly slams into the ground, creating seismic waves that are also collected with geophones to determine where to drill.

"You will know when these trucks are in your neighbourhood," said Merrill. "They're in a convoy of 3 to 5 trucks and the Department of Transportation has just given [shale gas company] Southwestern Energy permission to use public roads."

Once seismic testing has revealed to companies where to drill, they set up larger drilling infrastructure to perform the fracking process. Fracking is short for fracturing, the pumping of water and chemicals (at a pressure high enough to peel paint off a car) through a pipe deep down into the ground to the shale gas layer of the earth, creating fissures that release the natural gas trapped in it that will flow back up the pipe for collection on the surface.

"It's extremely water-intensive...it takes four million litres of water to frack one well once," said Merrill. "One well can be fracked up to six times."

Merrill said it's understood by CCNB that the plan for the New Brunswick shale gas patch, running in a band across the east, central and southwestern parts of the province, is 480 well pads, or one every five kilometers.

Companies also currently need permission from landowners to access private property in the patch, but not under it.

"The province owns the mineral rights underground and can do with it as they see fit," she said.

If a landowner wants out of a property contract with a company, the current agreement allows for that whereby the company abides by the landowners wishes. However, since there are no formal regulations in place governing that at the moment, it could change.

The CCNB is also very concerned about the chemicals used in the fracking process. According to Merrill, there is no law in the province requiring shale gas companies disclose the recipes they use when mixing materials onsite to create the frack fluid.

"This makes it difficult to pick up chemical measurements for the water samples...and hard to connect the site to damaged well water in the area," said Merrill.

CCNB research found over the life of a shale gas well, this frack fluid can, among other things, come back to the surface full of minerals and chemicals, wreaking havoc on the habitat. Currently in New Brunswick there is no technology available to treat the frack fluid making it safe to return to the environment.

Merrill went on to describe the infrastructure phase of the process where derricks are erected over the site which can be unstable. Surrounding vents release pollution, natural gas flares from the pipe emit hazardous waste and chemical containers stored onsite may leak.

Once a company is done with a well it's abandoned, often leaving behind unstable cement caps in the drill bore, a tailing pond full of toxic frack fluid and rusting storage tanks, to name a few. The landscape becomes scarred and fragmented from the destruction of the wells located sporadically in the countryside. A community is disrupted because it's quality of life is greatly reduced if the ground water or local fresh water is damaged.


Since the CCNB started working on this issue, it has found the number one concern for people is water safety. But, said Merrill, the shale gas industry has been reluctant to acknowledge the problem of water contamination.
"The industry says it's not a problem; there's nothing in the courts about it; their attitude is, 'prove it'", she said, adding, "A lot of people don't come forward, but instead sign a non-disclosure agreement with the companies to get water provided by them."

Merrill stated in New Brunswick there is often no information given to homeowners about the impact on wells when companies are working in the area. The CCNB has learned the RPC lab in Fredericton has been contracted by Southwestern Energy to provide water testing when required.

But if something happens during the fracking process, such as a weak well bore causing methane to migrate into the water well of a homeowner, the burden of proof is on that homeowner because many water wells have naturally-occurring methane.

Of grave concern to the CCNB is the surface water contamination that can occur with shale gas fracking.

"Sixty-four per cent of New Brunswickers get their drinking water from private wells fed by a watershed," said Merrill.

Merrill cited the recent report turned in by the province's energy commission appointed to look into energy options the government can pursue. The CCNB found it reduced targets for renewable sources from ten percent to three, focusing on natural gas for the future, putting watersheds in even more danger.

Although there is some regulatory legislation overseeing the industry in New Brunswick through the Oil and Natural Gas Act, there is a caveat at the end of it which allows the Minister of Natural Resources to have the last say if there is a dispute between a shale gas company and a private water well owner. There is also an Environmental Protection Act in place, but it's seen by the environment lobby as too antiquated and weak to meet the demands placed on it by this new shale gas industry in the province.

"Accidents happen; the regulations don't control that," said Merrill.
at 9:59 am