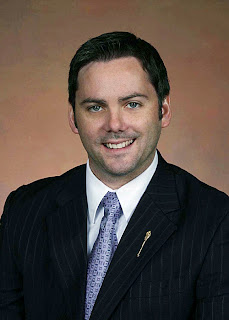 During a community information session Tuesday, June 7, concerned Southwest Miramichi constituents discussed their  fear of explosives and blasting that are part of the controversial shale gas fracking process coming to their region. It's possibly the most important issue in the area in years, but their Conservative representative in the provincial legislative assembley, Jake Stewart, was pursuing his own interest in blasting and explosives somewhere else: The D-Day celebrations in Normandy, France.
The military history buff, only a few credits shy of a history major, gave the keynote speech to an assembled crowd in Tailleville, France on Sunday, honoring the Northshore Regiment that landed on the beaches of Normandy nearby. On Monday, he toured Normandy proper, taking in ceremonies marking the event. If he was back in New Brunswick by Tuesday evening in time for the meeting, he didn't show, although organizers had previously invited him.

Stewart holds nothing in his portfolio necessitating his attendance at such military events, nor is he a member of a committee involving vets that would justify his appearance, but he felt the need to honor the regiment in person on Gallic soil nevertheless.

No doubt it's a noble gesture to hail the men of the only bilingual regiment in the nation's army during WWII, but the optics of the trip give the impression Stewart was so desperate to dodge the fracking meetings this week in his constituency that he paid for the trip to France out of his own pocket. It also gives credence to rumors circulating that he'd gotten so much email to his website from people in his riding concerned about fracking that it was shut down to avoid dealing with the issue.

Ask the surviving men who volunteered to serve the public when they were needed if they were comfortable charging the beaches of Normandy. It's likely they didn't want to show up either, but they did.

- With files from reporter Brett Bundale of the Telegraph Journal.
at 11:48 pm