Pet policy reversal a step in the right direction - NDP 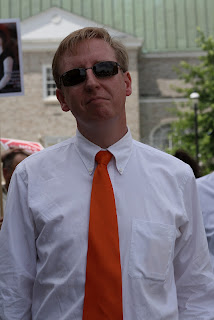 FREDERICTON - New Democrat Leader Dominic Cardy thanked Social Development Minister Sue Stultz for doing the right thing by reversing the eviction orders for NB Housing tenants in Moncton and ordering a review of the no-pets policy. The sudden reversal, two days after the Minister called on social housing residents to turn themselves in if they had a pet, comes in the face of mounting concern about serious health and safety concerns in NB Housing including reports of rat infestations, mould, drug use and other criminal activity. The New Democrats have worked with residents to make their concerns heard.

Cardy said, “As New Brunswick’s constructive opposition New Democrats join the seniors and other residents of NB Housing in recognizing Minister Stultz¹s decision to apologize for and reverse the eviction orders, and to let the residents keep their pets.”

Cardy said, “This controversy has brought up important issues around the way NB Housing operates, and concerns over the maintenance of its properties. I hope that Minister Stultz will, in addition to reviewing the pet policy, take action on the problems of health, safety, and crime that are a serious problem in many NB Housing complexes. We are happy residents get to keep their pets but now we have to make sure rats, drug dealers, and other unwanted pests are cleaned out of buildings paid for by New Brunswick taxpayers. New Brunswick's New Democrats look forward to working with residents of NB Housing, the government, and other partners to make life better for all tenants in social housing.”

Information from the Ministry of Social Development on the policy states:

•       There will be no evictions in connection with letters that were recently sent by the Moncton regional office.
•       Residents that recently received a letter asking that they find other accommodations for their pets can disregard that letter. It was sent in error.
•       Minister Stultz has instructed that Social Development immediately begin an internal review of what reasons would be considered medically required to allow a pet.
•       The objective of the review is to ensure the no-pet policy balances the obligation to protect residents from dangerous pets or unhealthy living environments while respecting the important medical benefits a family pet can bring.
•       While the review is taking place, the no pet policy will be suspended for current residents. But consideration will be given if concern is raised about pets that pose a danger to the community."
at 11:34 pm