Canadian abducted by Israel in Fredericton this week 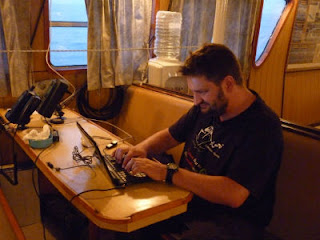 David Heap, a linguistics professor at the University of Western Ontario and Palestine solidarity activist, was on board the Canadian boat, the Tahrir, when it was seized by the Israeli navy in international waters. The Tahrir was part of an ongoing global solidarity movement challenging the blockade of Gaza and working for the freedom for Palestine.

Three Canadians, who were forcibly abducted from the Canadian ship Tahrir by Israel and detained without charge this past fall, are demanding the Conservative government press Israel return the boat and its contents. And they are taking this message directly to nine communities from coast to coast in an upcoming speaking tour beginning February 15 to address Canada’s role in the blockade of Gaza and give their firsthand account of the capture at sea of the Tahrir. 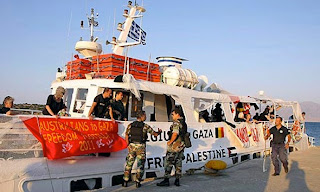 On November 4th last year, with a wink and a nod from the Canadian government, Israel sent a clear and unambiguous message to Canadian activists intent on challenging the illegal blockade of Gaza: Israel will not hesitate to use military force against you, and your government will do nothing to stop us.

Londoner David Heap, Montrealer Ehab Lotayef, and Karen DeVito of Vancouver, were on board at the time and are calling on the Canadian government to demonstrate its commitment to international law and the treaties to which it is a signatory, by:
"The Tahrir was purchased with donations from hundreds of ordinary Canadians and Canadian civil society organizations," said Heap. "Our grass-roots fund-raising campaign lasted more than a year, and now Harper’s Conservatives are doing nothing to help in the delivery of our ship and the $30,000 in medical aid on board, which the civil society in Gaza is waiting for," he added.

Israel has held the Tahrir and its contents in its possession without justification since November 2011. “Israel has never found, or even claimed to have found, anything dangerous or prohibited on the Tahrir,” said Lotayef. “Even according to Israel’s own arbitrary list of blockaded items, our vessel and its contents should be allowed to reach Gaza without delay. Yet this theft is added to the countless reckless actions for which Israel is being granted impunity by the Harper Tories,” added Lotayef.