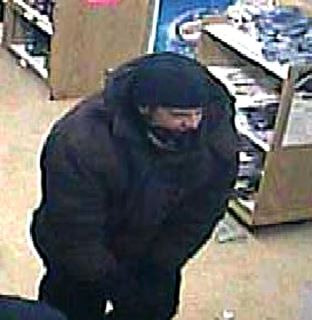 An image of one of the suspects has been released, above, from a security camera during last night's robberies.

On January 18, 2012, at approximately 8:00 p.m., the District 7 RCMP responded to an armed robbery at Estey’s General Store, on Route 104 in Millville, N.B. A masked man, carrying a firearm, entered the store. A shot was fired, but no one was injured. The store clerk and a few patrons were in the store at the time. The suspect left with an undisclosed amount of cash and cigarettes. He ran from the store and left the scene on a snowmobile.
About 90 minutes later, the District 2 RCMP received a report of an armed robbery at Zealand Convenience, on Route 104 in Zealand, N.B. In this case, two masked men entered the store. One had a firearm, and a shot was fired, but no one was hit. The store owner was assaulted and taken to hospital, where he was treated and later released. An undisclosed amount of cash and cigarettes was stolen. The suspects fled to a nearby trail.
The suspects in both robberies were wearing snowmobile suits. One man is approximately 5’5” tall and weighs about 140 lbs. The second man is about 6' tall and weighs approximately 250 lbs.
Due to the similarities in the two incidents, police believe the robberies may be linked. The RCMP Police Dog Service and Forensic Identification Service assisted at both scenes.
Anyone with information about these two crimes is asked to contact RCMP at 1-888-506-RCMP (7267). Information can also be provided anonymously through Crime Stoppers at 1-800-222-TIPS (8477), or www.crimenb.ca. Information leading to an arrest could qualify you for a cash award of up to $2,000.
at 3:02 pm