Editorial: Woodside a dictator who needs to go? 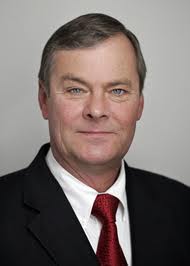 Fredericton mayor Brad Woodside has recently been in the media announcing deadlines for Occupy Fredericton demonstrators to dismantle their hut on City Hall premises. So far he has backed down each time. But in a  meeting with the group on New Year's eve, he wanted to know when they planned to move off City Hall ground.

As seen in the video below, it was clear during the meeting His Worship took a hostile and aggressive tone with the Occupiers. He continually talks of how he has been patient with the group, attempted to be fair and understand their message; as if he has allowed them to remain there out of good will.

Woodside's behaviour is disturbing. It appears he is acting unilaterally when a city government is supposed to be a democracy. It leads this publication to ask, is he acting on how he feels about this issue, or the electorate? And without a referendum on the matter, how can he ask the Occupiers to leave without truly knowing how the entire city electorate feels about the Occupiers at their City Hall site? And when did it become okay for a city official, elected to do the bidding of the people, to tell the taxpaying public what to do, because like it or not, the Occupiers are taxpayers that help pay for the ground City Hall sits on. They have the right to be there legally and constitutionally.

By taking such an approach, Woodside is illustrating what the Occupy movement is fighting against - the establishment dictating terms to the public and ignoring their civil rights. A recent article in a local paper said Woodside will run for an eighth term in this year's spring municipal elections. Given his length of service, he is clearly a member of the city's establishment. But like all political figures in power too long, Woodside has become out of touch with the younger populace of the city and the changes they desire. What's more, with his obvious aversion to the Occupiers and his implication of get out or else, he is behaving like some third-world tinpot dictator who will bully them out of Phoenix Square with force if necessary.

That is not what a democracy looks like. Since we have heard rumblings of some citizens planning to run against Woodside in May's municipal elections, perhaps Frederictonians, the younger ones in particular, ought to exercise their right to vote and send a message to City Hall that they want changes to how their city is run, they won't be bullied and it's time for some fresh blood in the mayor's office.
at 4:49 pm