The Codiac Regional RCMP is releasing a picture and updated description of the suspect in a robbery at a credit union that occurred on June 18. (photo left)

Shortly after 2 p.m., a lone suspect entered the institution at 1192 Mountain Road in Moncton and demanded money from an employee. He left the location with an undisclosed amount of cash. No one was injured during the incident.

The suspect is a Caucasian man in his late 20s. He is approximately 5'9" tall and stocky. He was wearing blue jeans, a black jacket, a green baseball cap and running shoes. 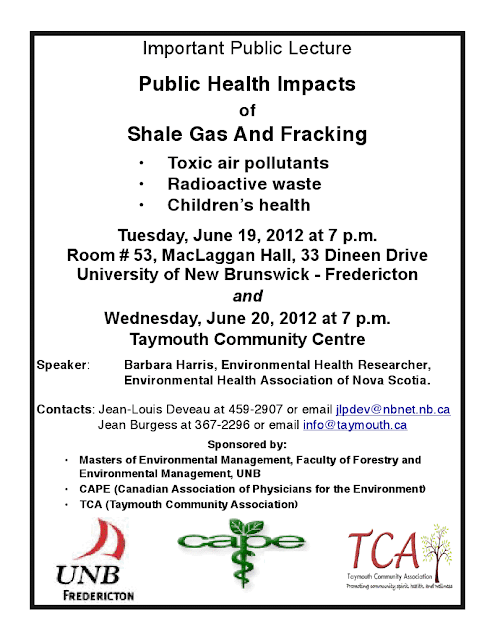 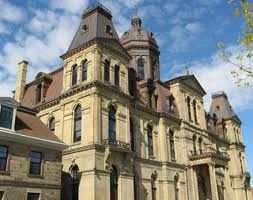 FREDERICTON - Bill 62, an amendment to the Municipalities Act which would give unincorporated rural areas the same authority to vote on shale gas exploration as municipalities, passed second reading in the Legislative Assembly with the support of government.

Stephanie Merrill, spokesperson for shale gas at CCNB Action is encouraged by the fact that the government voted in favour of the bill.

“We are happy to see that the government is supportive of legislating equal opportunities to rural communities and municipalities in deciding on shale gas exploration” said Merrill.

Merrill said that the current governance structure in New Brunswick means unincorporated communities have no legal mechanisms that give them the authority to decide if shale gas development, and other mining and development projects, is something they feel fits with the vision of their community.

“Since the bill passed second reading, we fully expect the government to bring its own version of the bill back to the Legislature during the Fall sitting”, said Merrill.

CCNB Action has been advocating that all communities be given this authority to define the type, pace, scale and place of shale gas exploration and development.
at 9:44 pm 6 comments:

The RCMP in Grand Falls is investigating a fire at a poultry farm in Saint-François, N.B.

Police and firefighters responded to the fire in the early morning hours of June 17, 2012. A building that housed a chicken nursery, located on chemin Bouchard, was destroyed by fire. Approximately 9,500 chickens perished.

The cause of the fire is under investigation and at this time is unknown.

Anyone with information about this incident, or who may have seen suspicious activity in the area is asked to contact the District 10 RCMP. Information can also be provided anonymously to Crime Stoppers at www.crimenb.ca or 1-800-222-TIPS (8477).

- There is some speculation this incident might be part of the ongoing dispute between Nadeau Poultry Farms and Groupe Westco. This publication did a story on the disagreement between the two companies earlier this year. - ED.
at 9:22 pm 31 comments: 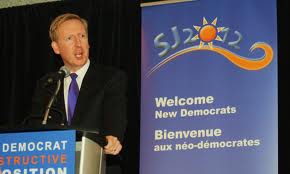 Cardy questioned Deputy Premier Paul Robichaud’s explanation for Premier David Alward’s decision to appoint former Conservative MLA for Rothesay Margaret-Ann Blaney to be CEO and President of Efficiency New Brunswick. Mr. Robichaud told the media that Ms. Blaney was hired to replace former CEO of Efficiency NB Elizabeth Weir, when in fact the position was filled in March by the deputy minister of environment Denis Caron, and has been previously held by other civil servants.
“My problem is not with Ms. Blaney – it is with the system that gives New Brunswick Premiers, Liberal and Conservatives, the power to play favourites with our public service,” said Cardy.

Since the Conservatives were elected Premier Alward has appointed his campaign co-chairs to head InvestNB and NB Liquor. The previous Liberal government also has a record of patronage. Former Premier Shawn Graham appointed one of his closest political advisors to be CEO of NB Liquor in 2006 and then, when he lost the election, made sure he was gifted with a secret pension.

Mr. Cardy is the New Democrat candidate in the riding of Rothesay, and has committed to ending patronage in New Brunswick.

“If elected I will bring the Rothesay Charter to End Patronage to the legislature,” said Cardy. “This Bill would make it an offense for an elected politician to try and influence the hiring process in any way.”

Cardy added, “Except for the individuals working directly for politicians, and ceremonial offices, all government appointments will be made based on merit and without the influence of elected officials.”

“For 150 years, the Conservatives and Liberals have traded power back and forth, making bad decisions that have undermined our economy and weakened our province,” said Cardy. “It is time for a change.” 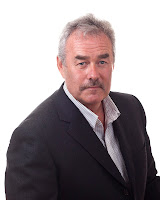 ROTHESAY – As Liberal candidate John Wilcox campaigns in the Rothesay by-election, he's finding there is confusion around the explanations the Tories have given regarding the appointment of the riding’s former MLA, Margaret-Ann Blaney, to CEO of Efficiency New Brunswick .

“This issue keeps coming up as I go door to door,” Wilcox said. “It’s become a source of embarrassment for the people of Rothesay, and the Tories keep making things worse by coming up with a new explanation every day.

“The bottom line is it was the wrong thing to do and no one in government can stand up and admit it.”

The day Blaney resigned as Rothesay MLA she was made CEO of Efficiency NB by Premier Alward.  There was no competition posted for the job, which commands one of the highest salaries in the civil service.

During a budget debate in the legislature this spring, the minister responsible for Efficiency NB, Bruce Fitch, said his party saved taxpayers $200,000 a year by eliminating the position of CEO of Efficiency NB, noting the duties were to be handled by an existing deputy minister.

A few weeks later, Alward announced Blaney was appointed to the job that had been eliminated.  Last week, Deputy Premier Paul Robichaud claimed the position had not been eliminated, directly contradicting his fellow cabinet minister Fitch.

The Conservatives promised to eliminate patronage during the 2010 provincial election campaign.

”I don’t agree with it, and I have yet to meet anyone who agrees with it during this campaign,” Wilcox said.
at 6:36 pm 11 comments:

Bill C-38 includes reforms to the Employment Insurance program that could have a devastating impact on New Brunswick’s seasonal industries.

The Opposition Liberals urged the Alward government throughout the legislative session to discuss the issue with the Prime Minister on issues that matter to New Brunswickers – including EI reform.

Collins, Moncton East MLA Chris Collins and critic for Post-Secondary Education, Training, and Labour is disappointed that Premier Alward refused to speak out against Harper during the EI debate. “Other premiers spoke out. But our premier has showed time and again he is reluctant to stand up to the Conservatives in Ottawa.”

Collins notes that it isn’t just traditional industries that will be affected by EI reform. Workers in the fisheries, agriculture, and forestry sectors are immediately thought of when reforms are discussed. Several other workers will be affected, however. “Think about teachers without full-time positions, TA’s, bus drivers, or any other staff in the school system. If they don’t have contracts, they don’t get paid in the summer. EI reform will hurt them too.”

Collins also notes how difficult EI reform will be on tourism in the province. “Yes, we have winter tourism, and have worked to grow that industry. But people mainly travel in spring, summer, and fall. It is difficult for workers living in tourist destinations to find alternate work in the downtime.”

Collins’ first concern is for seasonal workers. Like others, however, he knows these changes will negatively affect business owners as well. “First, the government will ask employees to drive an hour to find work in their down time. With the high price of gas, that has a cost,  and that’s if people have reliable transportation in the first place. Eventually they are going to move. We will be lucky if they stay in the province, but they are more likely to head West.”

With an out-migration of seasonal workers, businesses will struggle to survive. The Opposition Liberals worry that businesses in the province will close shop if the workers aren’t available.