Durham Bridge says no to shale gas at government meeting

DURHAM BRIDGE - About 100 people showed up last night at the Nashwaak Valley school in Durham Bridge to voice their opposition to the shale gas industry at a government panel. The area was the latest stop on the province's public consultation tour for feedback on its new shale gas recommendations to regulate the industry here. 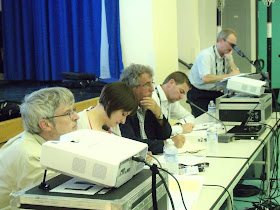 Chaired by distinguished University of Moncton biology professor, Louis LaPierre (photo left, navy blazer), the panel consisted of himself and three other members from the Natural Gas Group, the government body overseeing regulation of the industry in New Brunswick. Moderated by the group's communications officer, Marc Belliveau, questions were answered by, left to right, David White, Annie Daigle and Craig Parks.

But Durham Bridge wasn't having any of it. From the moment Craig Parks finished his presentation on the government's regulatory framework and the mic opened up to the floor, it was obvious the panel was up against a tough room.

"There's no issue here. Shale gas isn't going to happen in New Brunswick. It's a done deal," said Maggie Connell flatly. Connell is a resident of the area and strongly against the shale gas industry setting up shop in the province.

Member of the NDP party and local resident Sharon Levesque said, "If Mr. Alward thinks that this is such a great thing for New Brunswick, then call an election and let people speak."

In the video below, resident Milda Titford bluntly spoke for many in the room who are vehemently opposed to shale gas in the community:

Former Conservative MLA for Western-Charlotte, Tony Huntjens (photo, below left) spoke at the meeting, saying he was "flabbergasted" when he heard the government was bringing shale gas fracking to New Brunswick.

Current York North Conservative MLA Kirk MacDonald (photo, right), who represents Durham Bridge in the Legislature, was in attendance but opted not to comment, preferring to listen instead.

Resident Heather Whelan, a retired addictions counsellor,  raised the issue of the economic downsides of the possible prosperity from the shale gas industry. With an increase in money, she said, will come trouble with addictions in the population. She wanted to know if government has considered this.

Moderator Marc Belliveau responded to Whelan's query stating, "You're absolutely right, any community that gets a sudden influx of workers is going to have those kinds of problems...part of the framework that we've developed includes a community resources plan. That is being worked on as part of the whole framework."

It was a very well-informed crowd. Many came to the mic waving peer-reviewed scientific reports from reputable think-tanks while making their points against shale gas to the panel.

One unidentified gentleman who got up to speak handed the panel copies of a 200-page report from Germany entitled, "2050 - A hundred per cent." It's Germany's plan for one hundred per cent renewable energy supplies by 2050.

He presented it to the panel as another approach to providing energy supplies for public consumption that will be sustainable for use by future generations.

But having to do his own research upset the gentleman who told the panel, "I should not have to spend my free time doing this. The government should be doing it, and I should be able to get the whole picture...we need the whole picture to make informed decisions."

Others at the mic backed up their arguments with safety reports, economic evidence examining the royalty plan, and air quality data.

The panel was amenable to receiving the information, and took copious notes from those at the mic offering practical suggestions for them to look into on the issue.

But it wasn't just a night for practicalities. First Nations brought an emotional element to the discussion, exposing the public's sensitivities on the issue in a tension-filled room. Native Madeleine Huntjens pleaded for the Earth's water to the panel, as seen in the video below:

First Nations also brought up the matter of treaty recognition by the government in the shale gas matter. "I want to know, where is the legal obligation for consultation with First Nations?" asked Native Judie Aquin-Miksovsky.

She continued, "SWN says that the government's responsible. The government says that SWN is responsible. I want to know. There have been different meetings with Native associations and whatnot...but it's about trust...not every Chief, just like some MLA's that sit in our Legislature, can be trusted...They don't take into consideration what people in their communities want. The majority of First Nations communities don't want shale gas...there is a legal obligation you have to follow. Those treaties weren't just signed by Native people, they were signed by your ancestors. Are you going to ruin that? Are you not going to take responsibility in that?"

A topic that continued to be raised last night was the situation in Penobsquis. Many in the room worry that what's happening there with the loss of well water and land subsidence, likely due to both potash mining and shale gas industry in the area, will happen to them should shale gas fracking go ahead in their region. Residents don't believe government is equipped to protect them from industry should anything go wrong.

"We have regulations and recommendations and I believe your sincerity...but I'm pretty sure the mine in Penobsquis...was examined by a panel of experts, just like you...putting requirements in place to make sure it was done safely. It would seem logical to have in place all of the regulations before they [industry] got here, and to have the staff trained, and ready to enforce regulations. Then the people here who are so angry and frightened might be less so," said Paul McLaughlin from Marysville and President of the National Watershed Association.

In the video below, panelist Annie Daigle answers a question from First Nations member Judie Acquin-Miksovsky on government responsibility to citizens in the Penobsquis area:

Upper Miramichi resident Rick de Gruyl asked, if in the event of an accident where a homeowner's well water is contaminated, making the home and property worthless like those in Penobsquis, will the government pay a fair market price for the homes.

The panel's David White responded, "In terms of a plan to purchase property if that comes up, that hasn't been discussed. I mean, it's an option, certainly. But it's not in our discussion document [recommendations]. There are financial safeguards in the discussion document in terms of financial safeguards, for instance, there is a property damage deposit, if you want to call it that, that the industry would have to put down. That would kick in in the sense that if there was an impact to water quality or quantity in a water well then that would be paid for by industry according to the damage that was done."

Bringing up another issue, Greenhill resident Lawrence Wuest pointed out that in all of the government information released regarding the shale gas recommendations, there has been no mention of a health impact assessment the industry will have on local communities.

Wuest said New Brunswick's Chief Medical Officer, Dr. Eilish Cleary, won't be issuing her report on how the province will monitor the effects of industry on public health until summer. He said this makes it difficult for citizens to be fully informed for discussions during the consultation process.

"We're expected to comment on these discussion papers without having seen a health impact assessment...at the FORUMe in Moncton, there was not a health panelist in that whole series of panelists," said Wuest.

The panel's Annie Daigle said the Department of Health is doing it's own independent health  report in consultation with the Natural Gas Group. It will be releasing something publicly later this year.

"It's not in our documents. That was on purpose, to have it separate. It's a benefit to them somewhat, for us to be putting out what government's recommendations are for regulations on what may or may not be permitted in the province should shale gas development proceed. They've been fully briefed and are aware of what the problems are," she said.

Going past the scheduled 8:30 pm deadline for the meeting, the panel continued to listen for about another half hour before moderator Belliveau wound things down.

There are seven more meetings scheduled for the panel around the province. In the video below, LaPierre talks of last night's meeting and when he expects to turn in his report to government.